Connie Wray is the first to admit that, deep down, she’s really an adrenaline junkie.

The high points of her multifaceted career have included being cohost of Reno’s top-rated radio show, Bill and Connie in the Morning, for 22 years. She’s also hosted two local television shows, Living Local and What Women Want, and has emceed many high-profile regional events, including the Reno Philharmonic’s Pops on the River.

In 2012, Wray was inducted into the Nevada Broadcasters Association Hall of Fame by her colleagues.

These days she’s running her own production company, Connie Wray Inc., and is brand ambassador for 100.1 We FM (weekday mornings). And as if that weren’t enough, she has created an online docuseries, The Next Stage, highlighting people and organizations that are really taking the community to the next level.

“I’m always attracted to those people because they’re risk takers, and that’s who I am,” she says. “I’m definitely a risk taker.”

Wray’s early childhood, spent in her hometown of Bremerton, Wash., was typical of most American youths. But her world changed when her dad, who worked in government service, accepted an assignment in the Philippines. Her family spent six and a half years there, which accounted for most of her junior high and high school years.

Wray says that it was a great experience, due largely to her father, who took care to ensure the family was immersed in the culture. On any given day, they hopped in the car and traveled to local villages, trying the food, going to fiestas, and learning the traditions. Those early experiences made a huge impression on her.

“I think being able to explore new cultures and meet new people broadens your horizons,” Wray says. “You see the world in a different light. I think that’s why I always want to try new things. I want to see how I can push myself.”

That adventurous attitude extended to her taste buds. She was open to trying just about any culinary offering she came across in her travels, which also included jaunts to Japan and Korea. How daring was she?

“I’ve seen food that’s still moving on your plate before you eat it,” Wray says, referring to a squid dish called jumping salad. “It wasn’t my favorite Filipino dish, but I tried it.”

Fortunately, most of the other dishes she indulged in on the island were immobile and tasty. Many of them still are favorites that she makes regularly for her family and friends.

Wray says she’s a firm believer in family dinners, having grown up with that tradition. That was further reinforced by the Filipino culture.

“Living in the Philippines, I loved that food meant family,” she says. “Food meant time together. It was a part of everything you did. To me it was a sense of community.”

Wray regrets that she doesn’t have many family members who live in the area (besides her husband, Blaine Gaudard, and 12-year-old daughter, Story), but she says that her friends are her family, and she enjoys cooking for them. In fact, she says she has guests over at least three to four times a week.

And she admits that, for her, cooking always is an adventure. Why are we not surprised?

“I literally try to make something new every day,” Wray says. “I’ll try a new recipe, but I’ll change or add things, put my own flavor in.”

We would expect nothing less from the incomparable, innovative, creative Connie Wray.

Reno writer Barbara Twitchell has never been to the Philippines, but as a fellow risk taker, she credits her upbringing in Brooklyn, N.Y., for her adventurous spirit and palate. 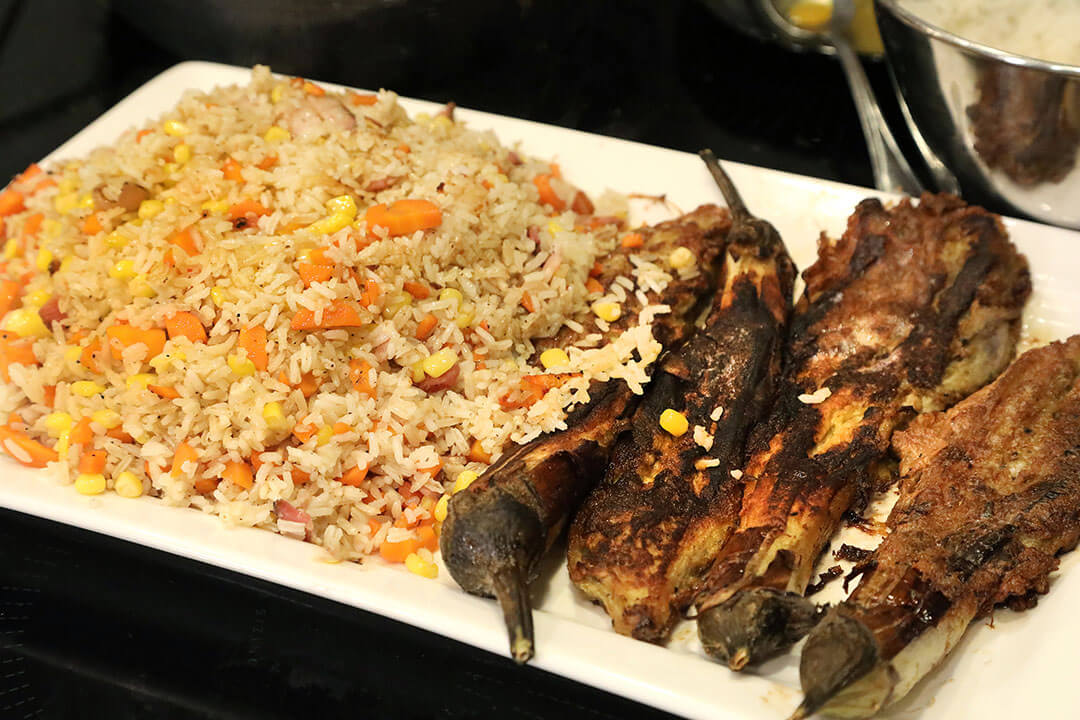 “This is a tasty, easy dish that my family loves, especially my 12-year-old daughter!” Wray says. “It’s a comfort food and the best way to eat eggplant — omelet style. I serve it over Filipino fried rice or by itself with ketchup and chili sauce. Enjoy!”

Grill whole eggplants on open flame, using either gas stove or charcoal or gas barbecue, turning to roast all sides. Once the skin is roasted and almost charred, remove eggplant from grill and allow to cool until comfortable enough to handle. Peel off skin and discard.

Heat 1 tablespoon cooking oil in large frying pan, over medium heat. While pan is heating, beat 2 to 3 eggs in a medium mixing bowl, adding a pinch of salt, pepper, and garlic powder to taste. Working 1 to 2 eggplants at a time (depending on size of pan), dip eggplant in beaten eggs, coating all sides. Place in heated oil (make sure oil is hot, otherwise eggplant will get greasy). Cook until both sides are golden brown. Place on heatproof dish in warm oven. Repeat cooking process with remaining eggplants. Serve warm. 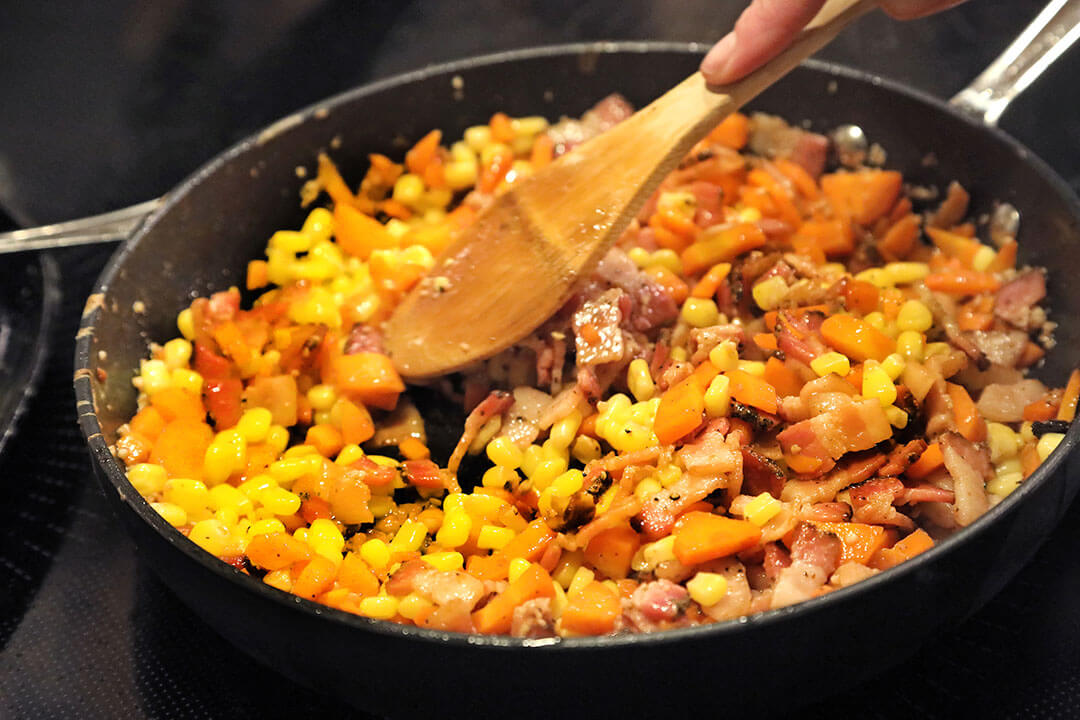 “I love to serve the Tortang Talong over my fried rice,” Wray says. “It also makes a great side dish for any meal. If you have rice left over in the morning, fry up an egg and place it over the rice for a delicious breakfast!”

In large sauté skillet, heat olive oil over medium-high heat. Add meat (bacon or sausage) and sauté while stirring constantly, about 3 to 4 minutes, until meat is just cooked. Add minced garlic to pan and sauté for 1 minute, stirring regularly. Add carrots, frozen peas, and frozen corn and cook for 2 to 3 minutes, just until veggies have softened.

Add cooked rice to the pan, and mix in with veggies. Once mixture is uniformly heated, move to sides of pan, creating a “well” in the center. Crack eggs into well. Stir immediately and briskly with a wooden spoon to whip into scrambled eggs. Once they’re mostly cooked and broken into small pieces, immediately mix them together with rice and veggies. Salt and pepper to taste. Remove from heat and plate. Top with sliced green onions (optional).