Almost 10 years ago, Great Full Gardens opened in Midtown, a district that in 2013 was on the cusp of reinventing itself from derelict to hipster. This was Gino and Juli Scala’s first full-service health food restaurant. But it was not to be their last.

Gino’s background is rooted in the food business. Working 27 years in sales and marketing, he also learned about developing recipes. Meanwhile, Juli, a life coach, was a self-taught food flavor master. When they had free time, they’d hang out in their kitchen, both creating soups. This led to an idea, pre-GFG, to trademark and sell their soups.

“We tried our soups on our kids and family first,” Gino says, adding they also took soup to yoga classes for fellow yogis to judge.

Cyndi Wallis, who met the Scalas in yoga class in 2012, heard about the future vision of the Scalas’ restaurant. As a nutritional counselor, her interest was piqued. It wasn’t long before she was on board as co-owner.

Great Full Gardens, as it turned out, was in the right time and place to offer a new vision of health food. It introduced an inclusive menu for everybody: vegetarians, vegans, gluten- or dairy-free folks, and paleo patrons. Dishes were based on grains, beans, and fresh vegetables and fruit, as well as organic chicken, pasture-fed beef, and Alaskan wild-caught salmon — the basics of healthy eating.

It paid off, clicking with customers of all ages. (You don’t need to look hard for social media kudos on its food, comfortable atmosphere, and friendly staff.) Success prompted two more GFGs: one in South Reno (2016) and one at The Outlets at Legends in Sparks (2019). In the same year the South Reno GFG opened, so did The Kitchen by Great Full Gardens, aka The Commissary, as the Scalas call it. It serves as the main kitchen for soup production and cold-pressed juices; plus, it’s a cozy café with a smaller menu.

The original GFGs share a large menu consisting of plant-based, vegetable-laden bowls; hearty paleo bowls; inspired sandwiches; festive Mexicana-based dishes; and even liege (Belgian) waffles, made with dough, not batter. And there are some surprises, such as a jackfruit burger and a turmeric latte.

“At one point, turmeric was the No. 1 super drink [on our menu] until the red velvet latte was introduced,” Gino says, adding that the latter is made with beet powder.

One sip and you’ll understand why it’s No. 1. Your cup arrives with an artful barista design on foamed milk, pink because of the beet powder. You take a tentative sip. Yum! There’s no beet flavor (just heathy benefits from it); the sans-coffee latte is subtly sweet with the addition of chocolate and maple syrup. Lovely.

Wallis, now GFG’s co-owner and marketing vice president, has worn many hats during the years. One has been as creator of the super-food beverages that are popular on GFG’s menu.

“Cyndi is our wellness goddess,” Gino says of the Scalas’ partner. “She does her research to blend drinks that earn the most health benefits.”

Looking at other menu items, most popular are paleo bowls and a grouping of sandwiches, such as the bestselling turkey pesto and “all the Reubens. They rip!” says Gino. Whether vegan, made with tempeh, or carnivore style, with turkey or pastrami, they’re all winners. Each is made with fermented organic sauerkraut, provolone (or vegan “cheez”), and house-made, tangy-sweet thousand island dressing. No skimpy portions of tempeh or meat here; each Reuben is a tasty mouthful.

As for the soups, in 2010, they debuted locally under the trademark name GinoTheSoupMan. The soups, which are frozen products, are available in select Reno markets and in the Scalas’ GFG restaurants. Recently, the soup business expanded to include nationwide shipping. 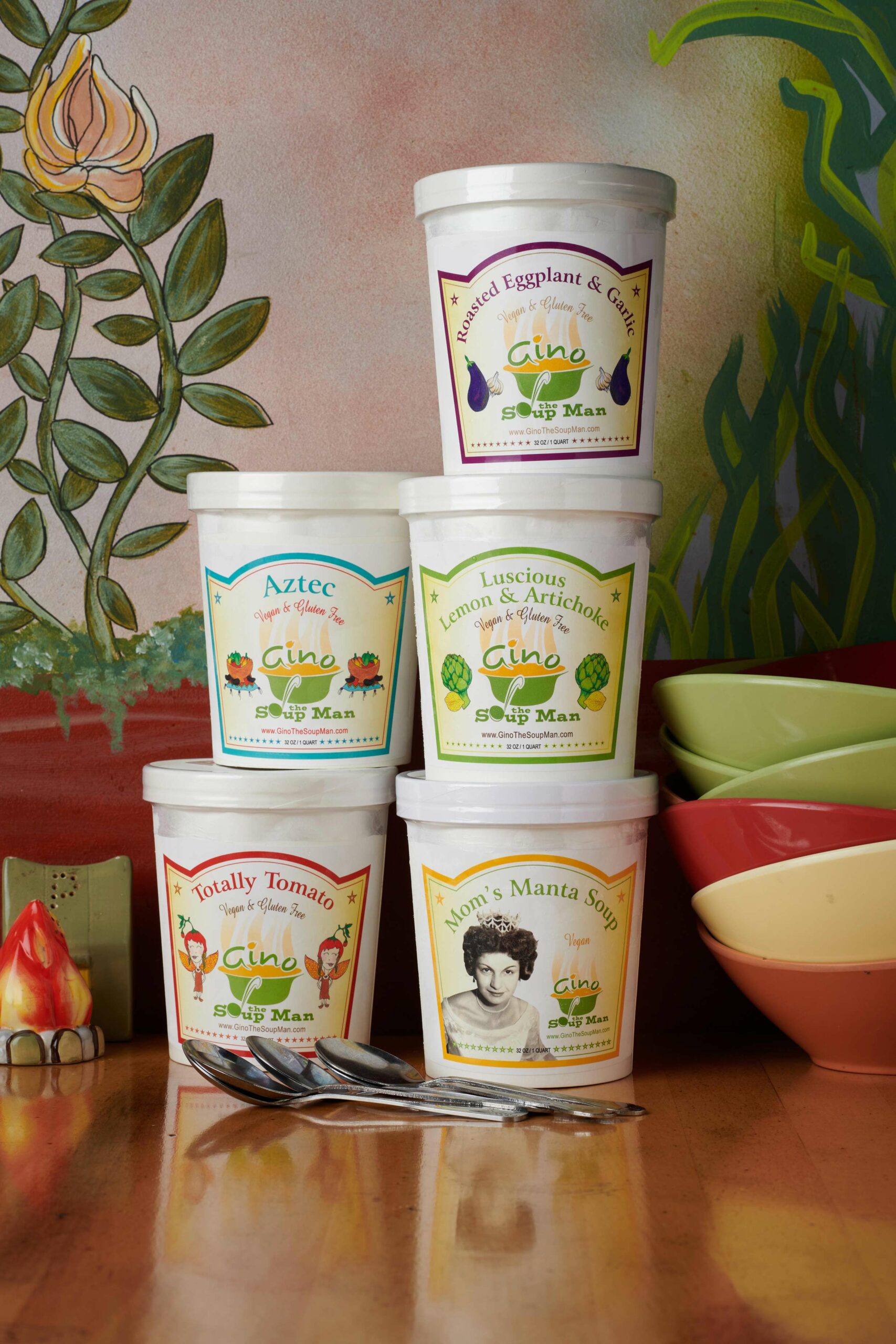 His other new campaign promotes using the soup as an ingredient in other dishes. (Check out the Gino The Soup Man channel on YouTube.)

Even with the interruption of the pandemic, the Scalas have maintained a steady course. The main ingredient to their success, Gino will tell you, is the staff, which is trained in Gino’s yoga spirit and Juli’s life-coaching expertise — training that involves manners, respect, kindness, and, yes, even loving service.

“Juli is the mother of that energy,” Gino says. “That’s ‘the secret sauce’ in how the team is trained.”

What keeps Scala going? He beams like a proud father.

“The biggest thrill now is watching the young managers [of the three GFGs] and the kids (what Gino calls his team) grow and contribute to the business and the community,” he says. “Overall, it’s about the ‘beingness’ of our team.”

So what’s next on GFG’s plate? Possibly another location out of state. Stay tuned.

Sandra Macias, Reno-based food writer shares co-owner Gino Scala’s interests in yoga and wholesome food, equitable pay, health insurance, and other benefits for his team, as well as old-fashioned manners, which he says are the foundation of GFG’s success.

The Kitchen by Great Full Gardens

Cook soup according to directions on the container. Heat to 160 degrees F and lower heat to simmer.

Cook penne according to directions on package. When ready to serve, place tablespoon of sauce in bottom of dish, add penne, and top with sauce mixture. Garnish with chopped parsley and grated Parmesan.

(courtesy of Great Full Gardens in Reno-Sparks. Serves 4 to 6)