Tahoe Fund’s Amy Berry knows her way around a brisket.

When Amy Berry, CEO of the Tahoe Fund, was growing up in Princeton, N.J., it wasn’t uncommon for her to walk into the garage and find a duck hanging from the ceiling in preparation for Peking duck.

“My dad loved to make funky stuff,” Berry says, laughing. “My mom was this gourmet cook, but her specialty was what we called the ‘garbage salad.’ She’d take everything from the fridge — cold cuts, lettuce, veggies — chop it up and make her own dressing.”

Berry’s childhood food memories are full of overflowing sub sandwiches from Hoagie Haven, and Philly cheesesteaks inspired by nearby Philadelphia. Summers were spent on the Jersey Shore catching blue claw crabs to cook up in Old Bay seasoning, and Jewish holidays always were celebrated with homemade brisket.

Learning the Ropes
It wasn’t until her senior year at Brown University in Providence, R.I., when Berry truly delved into cooking for herself.

“My senior year I could finally live off campus, and I had an amazing roommate, Miriam Belleca, from Rome,” Berry recalls. “She would take us up to Federal Hill, which is like a little piece of Italy within Providence. She would get all of these amazing, real Italian products and then come back and make these crazy ragùs and mushroom sauces. She taught all of us roommates how to cook.”

After graduating with a degree in American civilization with a focus on urban studies, Berry worked in advertising in New York City before her husband secured a job that would take them to Lake Tahoe, where his parents had a home.

“We thought that no one lived in Tahoe, they just vacationed out here,” Berry says.

Transitions in Tahoe
After a stint at Tahoe Quarterly and a switch to marketing roles at two renewable energy companies, Berry’s friend approached her about a position at a nonprofit. Though skeptical about leaving the corporate world, it didn’t take her long to realize the importance of the organization’s mission.

In 2012, Berry took the position of CEO at Tahoe Fund, a not-for-profit with the goal of providing private funding to projects across the basin that support forest health, lake clarity, sustainable recreation, transportation, and stewardship.

Just as her career took a new direction, so did her cooking, which now looks a lot different from those days of learning traditional Italian fare. For one, Berry is now gluten free, and her 13-year-old daughter is vegan for a reason that makes her parents extremely proud: the climate.

“The Instant Pot has been a lifesaver,” Berry says. “We can toss vegetables in there to steam quickly and top with vegan butter. It’s delicious.”

Getting her daughter in the kitchen also has been an important step in the process.

“She’s like a mad scientist in the kitchen and makes a total mess, but she enjoys it, and it’s fun to see how excited she is about it,” Berry says.

But her own and her family’s dietary changes haven’t kept Berry from making her massive brisket for gatherings during Hanukkah or Rosh Hashana. It’s marinated with Coca-Cola, soy sauce, Dijon mustard, ketchup, vinegar, garlic, ginger, and more.

“My mom’s trick is not to let it cook for the full period of time. You pull it out and slice it before it melts apart, then lay the slices in the cooking juices and continue cooking the next day or that day,” Berry explains. “And do not forget to cut against the grain!”

Claire McArthur has interviewed Amy Berry about her important environmental work with the Tahoe Fund a number of times, but never once has she been given this brisket recipe. She’s excited to have it. 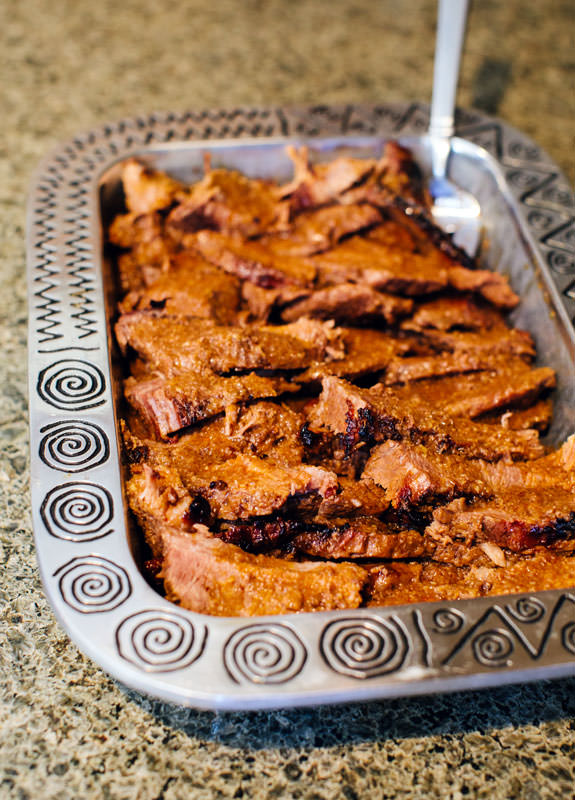 Heat oven to 350 degrees F. Put all ingredients (except brisket) into a food processor and blend until smooth. Put brisket fat side up in a heavy baking pan just large enough to hold it, and pour sauce over it. Cover tightly and bake 2 hours.

Turn brisket over and bake uncovered 1 more hour or until fork tender. Slice brisket, laying slices in juices, then cool, cover, and refrigerate overnight in cooking pan. The next day, remove from refrigerator and put back in oven at 350 degrees F for 20 minutes.