Soupin’ up Reno-Tahoe and beyond.

When Gino Scala calls out, “Soup’s on!” he means it literally. He’s the name, face, and, along with wife Juli, creator of Gino The Soup Man Soups.

Scala didn’t set out to be a soup maker. Not that it was beyond imagination. After spending a childhood in the family kitchen as his mother’s sous-chef, he’s as comfortable with cooking as he is on the ski slopes. But instead of donning a chef’s hat, he spent 30 successful years in food sales and marketing.

“A doctor told me I’d have to take medication for the rest of my life,” he says.

For Scala, that wasn’t an option.

He purged his diet of processed food and added yoga to his weight-lifting routine. Juli already was a healthy eater, which made the transition easier.

“Within a year, every test came back normal,” he says.

Marketing mainstream foods no longer appealed to him.

“We wanted to make a difference, to demonstrate that people can eat wholesome and healthy foods all the time,” Scala says. “Juli had the vision and I knew the ‘how.'”

Soup seemed a sensible starting place. The couple began by using organic tomatoes as the base for their tomato soup, which they froze (no preservatives required) and sold at the Bikram Yoga Studio in Reno that they attend. Inspired by its popularity, the Scalas created a variety of all-natural, mostly organic, vegan soups using local ingredients when available. Soon their market expanded.

“They said they wanted to carry our soup,” Scala says. “I couldn’t believe it.”

First came an intense audit, in which Whole Foods officials reviewed everything from its ingredients to its fair-trade practices. Nine months later, Gino The Soup Man Soups were in the store’s freezers. Scala says they’ve become the number one, private brand frozen food seller. Production jumped from 14 gallons a week, where it started, to 180 to 200 gallons a week.

“We spend six to eight hours every day making soup!” he says. About 150 quarts go into Whole Foods Market freezers in Reno and Roseville, Calif.

The rest are sold at local businesses and in their Pathways Café on the University of Nevada, Reno campus and full-service Great Full Gardens Café in Reno’s midtown district. Why open restaurants?

“We want to bring healthy food to the mainstream,” he says.

Whole Foods Market has offered to sell their soups in more stores. The Scalas are excited, not nervous, about expanding, he says.

“We think we’ve found the recipe for creating good things in life and sharing them,” he says.

Order a Pint or Bowl 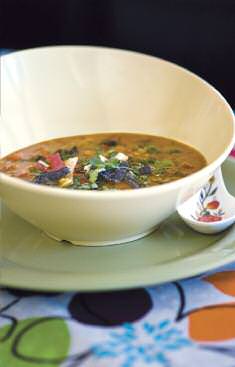