“Marriage should be a duet – when one sings, the other claps.” ~ Joe Murray

As Jeff Thompson relates a story about their somewhat unusual courtship, his wife of 15 years, Teresa Benitez-Thompson, listens intently. Jeff is witty, loquacious, and exceedingly entertaining. Teresa beams. A moment later, their roles are seamlessly reversed.

Winding through the stories, their notably contrasting personalities, backgrounds, and lifestyles come to the fore. He’s an introvert, naturally shy, and cautious; she’s unabashedly assertive and daring. He had only brothers; she had only sisters. He hailed from Arkansas; was part of a generations-old, traditional Southern family; and was an Ole Miss grad, like his parents. She was raised in Reno by a single mother, is a first-generation college grad, and is proud of her half-Hispanic heritage.

Right from the start, they appeared to be a rather unlikely duo: the beauty queen and the weekend TV weather guy/part-time reporter. He was assigned to interview the newly crowned Miss Nevada 2002, who would go on to clinch third runner-up, almost capturing the Miss America title. Jeff admits he didn’t think he had a chance with her at first. In fact, it was Teresa who finally sent an email asking him out!

In food terms, they’re like peanut butter and jelly — so different that there’s no way they should go together, yet they make an unbeatable combination.

It’s a good thing because their lives haven’t exactly calmed down. Jeff is now the chief meteorologist at KOLO 8 News Now in Reno. Teresa works two demanding jobs. Best known as the majority floor leader of the Nevada State Assembly, she also is a licensed social worker by profession, employed in health care for the past decade.

But wait, there’s more. They also have four children ranging in age from seven to 13.

From the beginning, food was a challenge for this couple. When they met, Teresa had been a health-conscious vegetarian for 15 years, and Jeff a meat-loving fan of deep-fried southern cooking. Obviously, their ethnic and regional food preferences were vastly different.

“It took a while, but we influenced each other, for better or worse,” Jeff says.

She’s now an omnivore, and he has embraced healthier eating habits.

“We could do better,” Jeff adds, “but we try for balanced meals, more vegetables, brown rice, wheat-based pasta, and foods like that.”

They still enjoy some of the southern dishes from Jeff’s childhood, using handwritten, personal recipes passed down to them by his mother and grandmother. And some of the Mexican dishes from Teresa’s youth now are family favorites in their household.

But there were other food challenges along the way. After all, they do have four young children. Any parent knows the difficulties that can pose. To say that children can be picky is somewhat of an understatement.

“When I’m planning a meal, I think, if four of the six humans in our house will eat it, then it’s a go!” Jeff says. “That’s my ratio.”

There’s yet another challenge: Jeff and Teresa work different shifts. Jeff does the evening weather, meaning he works from 2:30 – 11:30 p.m. Teresa’s work commitments vary, depending upon the legislative calendar, but hers is more of a daytime schedule.

Surprisingly, they say this has proven to be an advantage, particularly in parenting. He’s with the children through the morning; she gets them through the evening. As a result, they have rarely needed childcare assistance.

Despite their demanding careers, different work schedules, and sizeable family, they make 95 percent of their meals at home. The couple shops together and shares the cooking duties. True to their personalities, Jeff usually relies on cookbooks while Teresa excels at winging it.

“We’re cooking for an army, so we do a lot of big roasting meats,” Teresa says. “I load up on turkeys during Thanksgiving, and I cook them all the time. It’s a great smell in the house, and we eat on that bird for three days. It’s lunchmeat, and it’s dinner, and it’s snacking, and you can make soup out of it.”

Other favorite meals depend upon the season. In cooler weather, their go-to tool is the slow cooker. Jeff usually starts the meal during the day, and Teresa finishes putting the meal together in the evening. It makes a hearty family meal that easily can be kept warm for Jeff, whenever he makes it home to eat between news shows.

“In the warmer weather, it’s all about the grill,” Jeff says. “It’s fast, it’s easy, and you can grill just about anything.”

That includes veggies from their huge summer garden. Yeah, they do that too.

Reno writer Barbara Twitchell loved spending time with this amazing, funny, interesting couple, but she must admit that she was exhausted just hearing about their crazy, busy schedules. 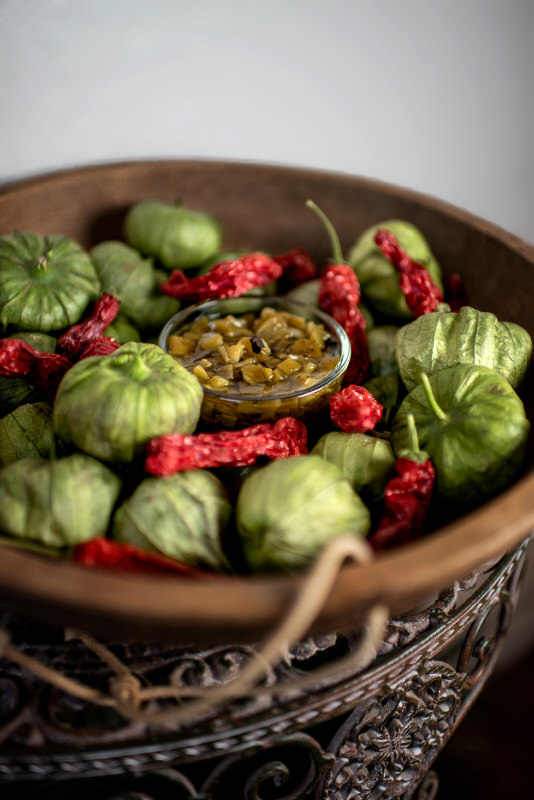 This recipe serves “exactly six Thompsons!” Jeff calls this a “unicorn meal” — a rare dish that everybody in the family loves (not an easy feat to achieve when the family of six includes four children, ages seven to 13). The recipe is pretty mild so that it is child-friendly, but it can easily be spiced up to please any palate.

Sauté onions in olive oil over medium heat until translucent. Add tomatillos, chiles, and chicken broth. Bring to a boil and cook until tomatillos are soft. Bring heat to medium-low. Using an immersion blender, purée to achieve sauce consistency. Stir in spices and simmer an additional 10 minutes to blend flavors. Remove from heat. For best flavor, refrigerate overnight.

2 pounds pork, carnitas-style, or your choice of cut (i.e. pork shoulder or tenderloin)

Season meat with garlic salt, cumin, and Tajín. Cook in slow cooker on high 4 to 6 hours, or on low 6 to 8 hours, until meat is fork tender and falls apart easily. Remove meat from slow cooker, drain off excess juices as necessary, and pull meat apart or shred with a fork. Mix in about 1 cup of enchiladas verdes sauce to moisten and flavor meat, then set aside.

Preheat oven to 350 degrees F. Prepare two 9-by-12-inch casserole dishes by coating bottom of each with enchiladas verdes sauce. Place a tortilla in dish and turn to coat both sides. (For tortillas that remain crisp as they bake, fry them first in a skillet of hot oil on both sides for a few seconds before adding to the dish.) Add ¼ cup of shredded meat down center of tortilla, then roll to enclose. Repeat with next tortilla and continue until both casserole dishes are full and/or filling is used up.

Smother enchiladas with remaining sauce and sprinkle half the Cotija cheese over each dish. Bake for 20 minutes until enchiladas are hot and bubbly. Any leftovers can be refrigerated or frozen, reheated, and enjoyed another day!