The Heart of the Matter

When you receive an email from Dr. Letitia Anderson, more than likely the above quote would be present somewhere at the beginning or end of the message. The idea it conveys is an important part of her life philosophy, as well as the way she approaches her work as one of Reno’s premier cardiologists.

Anderson is the chief of staff at Reno’s new Sierra Medical Center, the region’s first acute care hospital to be built in more than a century. She also is the newly elected governor of the American College of Cardiology’s Nevada chapter.

Anderson and her husband, Ian, moved here from their home state of Vermont 15 years ago. After scoping out numerous other communities across the nation, they decided Reno checked all their boxes. Prime among those reasons, she says, was the fact that Nevada is one of the least-served states for cardiac care. She believed that she could make a real difference here.

In addition to carrying a full patient load in Reno, from the beginning, Anderson has been adamant about also serving the rural communities with diminished access to cardiac care. Even now, she routinely drives to Winnemucca and Fallon to see patients and does telehealth visits with those in Hawthorne and Elko.

Yet it was more than Nevada’s need for cardiac care that drew her to our region. The integral relationship of nutritious food to heart health was another major concern.

“Food equity in this state ranks rock bottom [among all states] at 50, with one in three children needing food assistance,” Anderson says. “Eighty percent of heart disease is preventable. Access to healthy food is vital to a healthy body.”

In line with that goal, Anderson has served on the board of the Northern Nevada Food Bank for the past eight years. Her involvement includes pitching in at the distribution center, alongside her husband and their sons, ages 13 and 14.

Unlike what you might expect from a high-ranking medical professional, simple, basic, and low-key define just about everything in Anderson’s personal life.

The family of four (and their two great Danes) lives in a modest, cozy two-bedroom, one-bath home in the heart of Reno.

Meals are simple and basic as well, with lots of fresh, organic produce, and mostly chicken or fresh salmon for protein. They patronize Great Basin Community Food Co-op and local farmers’ markets for the freshest foods available. Meal preparation often is a family affair.

“My husband is a really great cook,” she says, “and usually the four of us are all together in our tiny kitchen at the same time. And our great Danes are usually in there, too!”

With a sheepish smile, Anderson admits that bread is one of her guilty pleasures. She bakes her own loaves, using a 15-year-old sourdough starter and unbleached, organic, whole-wheat flour. She also loves to make homemade pizza and pretzels, activities the whole family always does together.

Anderson says her favorite food of all time is Irish soda bread, which hearkens back to her mother’s heritage. The family still owns a cottage on the rugged Irish coast that most family members (she’s the youngest of seven) visit every summer. It has no running water and no heat, but they love every minute of their time there.

She offers no apologies for her passion for bread. In fact, she thinks it exemplifies an important lesson we all should embrace.

Reno writer Barbara Twitchell says Anderson is a breath of fresh air. Her joyful, caring, and balanced approach to life should be an inspiration to us all.

“Our neighbors in northwestern Ireland told me that this was the best recipe to give to their kids in college” Anderson says. “So true! Pure and simple, and so great with avocado or butter or jam. Easy to freeze and save — before or after baking. And no yeast! So fast and bombproof. Has been the favorite in my family, here and abroad, well … forever!”

Preheat the oven to 375 degrees F.

Sprinkle 1 teaspoon all-purpose flour over the center of a baking sheet and set aside. Put 2 teaspoons of the all-purpose flour into a small bowl and set aside. In large mixing bowl, put remaining all-purpose flour, whole-wheat flour, baking soda. Mix well with your hands to combine. Add butter, breaking it into small pieces with your fingers. Blend it into flour mixture until combined. Make a well in the center of the flour-butter mixture and add buttermilk. Slowly incorporate buttermilk into flour mixture with your hands until a rough ball forms, then turn out onto a lightly floured surface and form into a neat ball (without kneading).

Transfer dough to center of baking sheet, on the flour, and press gently to form a 7½-inch-wide round. Using a sharp knife, slash a cross ½ inch deep across the entire top of the loaf (according to Irish lore, this lets the fairies out), and dust top of loaf with reserved flour. Bake until bread is lightly golden and a tap on the bottom of the loaf sounds hollow, about 35 minutes. Wrap bread in a clean kitchen towel, prop against a windowsill, and allow to cool for more than 30 minutes — if you can stand to wait that long! 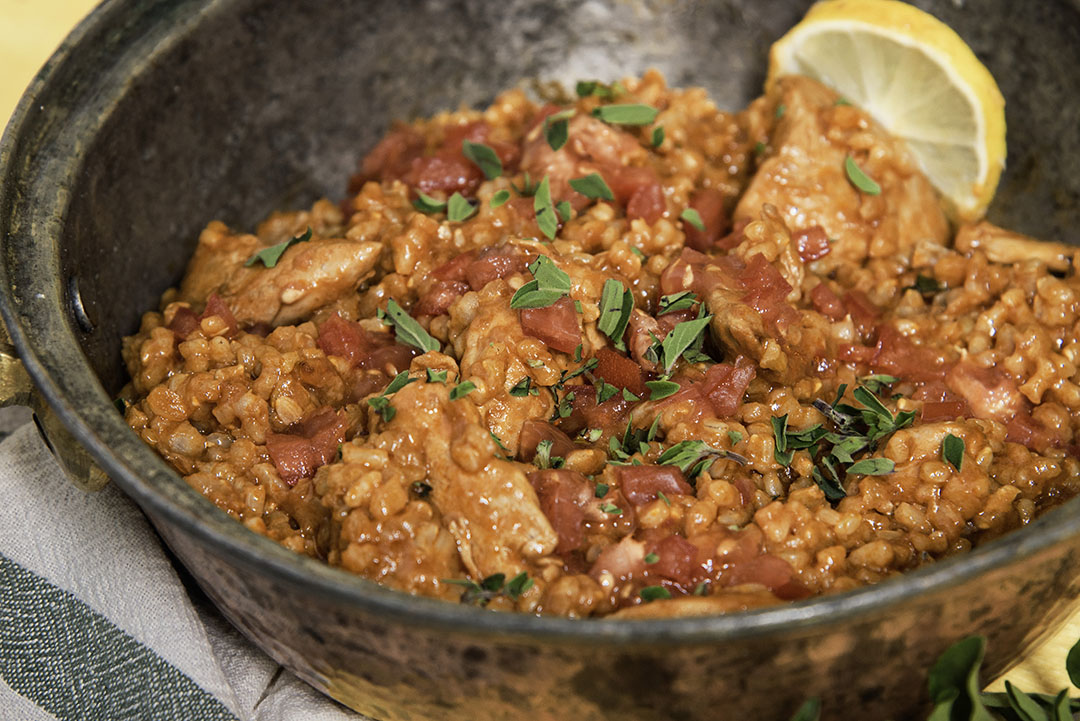 “We have made this almost weekly from the time the boys were born — and they can do it now themselves!” Anderson says. “So simple and easy, for even a child helper.”

In a large skillet, melt butter. Add rice and half of the tomato paste. Sauté until golden brown, around 15 minutes. Remove from heat and set aside.

Heat olive oil in medium skillet. Coat onion and chicken with remainder of tomato paste and add to skillet. Add salt and garlic, and cook until golden brown.

Add chicken mixture to rice mixture in large skillet — do not mix. Add water and completely submerge with 1 inch of water to cover everything. Bring to a boil, then cover and simmer 30 minutes. (“We use organic brown rice, and that will double the time to 60 minutes,” Anderson says. “It’s OK to test and keep cooking.”)

Turn off heat and mix. Cover for 10 minutes. Then taste and serve. Anderson and her family try different options for fun and variety, such as sprinkling rice with shredded jalapeño Jack cheese when the heat is turned off, then allowing it to melt. Or sprinkle on your favorite fresh spices prior to the end — Anderson’s family loves paprika and cumin.

“Don’t be daunted by the list of ingredients,” Anderson says. It’s fun — a bit messy, and worth gathering everyone in the kitchen to toss them around. Throw them as high as you can (be sure to catch them). So fun! We started making them when the boys were toddlers — do read Walter the Baker by Eric Carle. You’ll understand.” 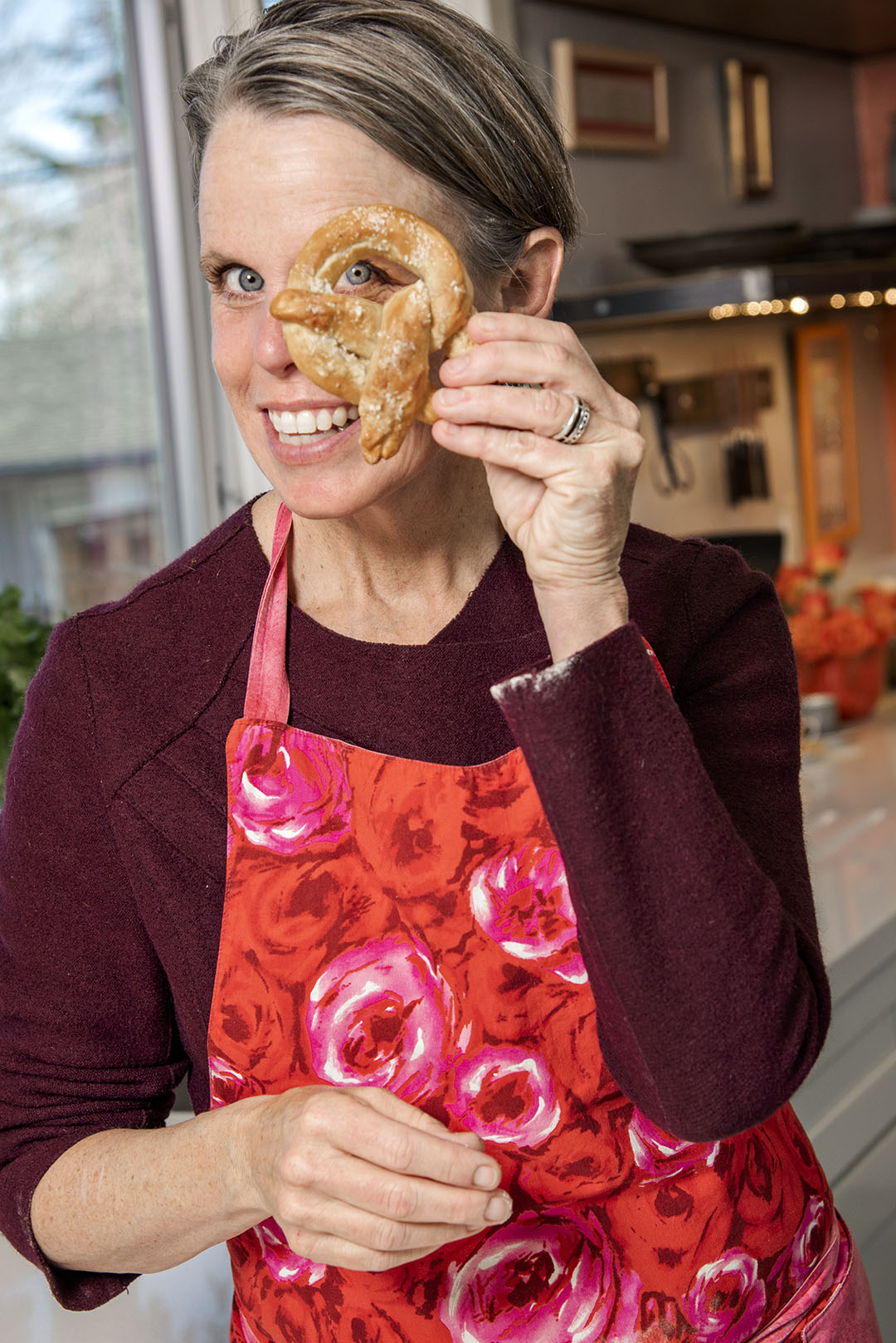 Place all dough ingredients into a bowl and beat until well-combined. Knead the dough, by hand or machine, for 5 to 8 minutes, until it’s soft, smooth, and elastic. Let rise for 30 minutes in a lightly greased bowl.

Meanwhile, make the topping. Combine the boiling water and baking soda, stirring until the soda is totally (or almost totally) dissolved. Set mixture aside to cool to lukewarm (or cooler).

Preheat oven to 475 degrees F. Line a baking sheet with parchment paper. Transfer the dough to a lightly greased work surface and divide it into eight equal pieces. Allow pieces to rest, uncovered, for 5 minutes.

Transfer pretzels to prepared baking sheet. Sprinkle them lightly with coarse kosher or pretzel salt. Allow them to rest, uncovered, for 10 minutes.

Bake the pretzels for 8 to 9 minutes, or until golden brown. Remove from the oven — brush all over with the melted butter. It may seem like a lot — but this is a once in a while treat. Enjoy!

Optional: If you have sourdough starter, this is a great chance to use some of it. Simply use 1 cup of your unfed/discard starter in the doughmaking step and decrease the yeast to 1½ teaspoons.