Looking for the best tacos our area has to offer? We’ve got the inside scoop on that! You can find authentic Mexican cuisine all over the area, as well as flavors that are a little untraditional, to best fit your tastes, including great Reno tacos. Get out and enjoy all the tacos Reno and the surrounding area has to offer with our list of tasty choices.

South Reno
The southern part of Reno has a few excellent Mexican restaurants to try, or taste tacos at them all if you want to take the full trek like we did for our summer edition.

First visit Chihuahua’s Cantina & Grill, originally founded in Winnemucca 20 years ago by Dora Rivera who then expanded her restaurant to be part of the Reno taco and Mexican cuisine scene. Rivera hails from the meat-centric area of Chihuahua, in northern Mexico, which guided her menu creation. Her kitchen team makes tortillas in house as well as four salsas — a traditional red, mild green tomatillo, pineapple/habanero pico de gallo, and spicy habanero. With offerings from street-taco-styled meals to Cuban- or Baja-styled options, Chihuahua’s Cantina & Grill will not disappoint. 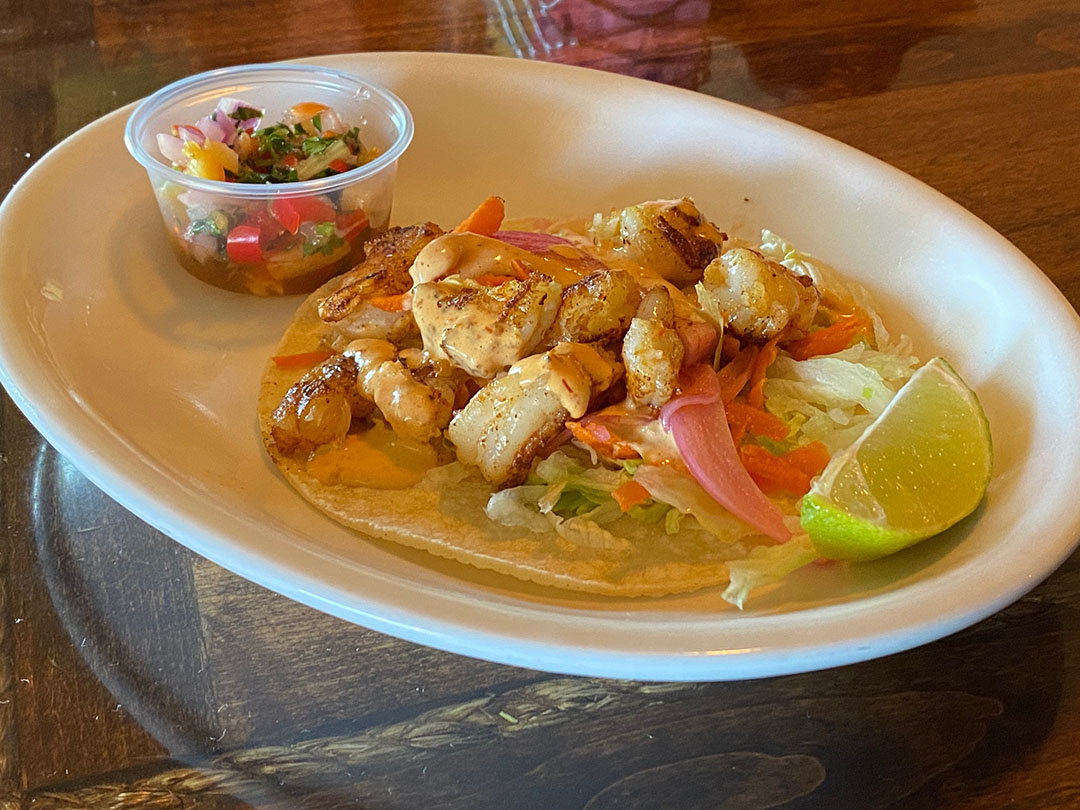 Another must-try place for tacos in south Reno is Dream Tacos & Cantina. Luis and Liliana Ventimilla opened the eatery in April 2020; he’s the manager and menu designer and she’s the chef. With Guadalajara-style dishes taking center stage on the menu, a different set of flavors will dance across your taste buds while you eat. The food is made from scratch, including the chorizo, al pastor, tortillas, and six types of salsa. The most popular ordered dish, according to Luis is the quesabirria, a savory, juicy, braised beef short rib. The meat is piled with mozzarella, then grilled inside a corn tortilla, and served with a cup of consommé for dipping.

Next on our trek for Reno tacos was House of Mexica, where vegan and vegetarian items fill the menu’s pages. The restaurant serves plant-based dishes emphasizing ancestral ingredients. Try the hibiscus flower, featuring chopped pineapple for a sweet bite; and nopal, made with juicy nopal cactus pads that contribute tanginess and are seasoned to offer a satisfying heat. For a more meat-filling-styled taco, the al pastor made with soy crumbles is a great option. 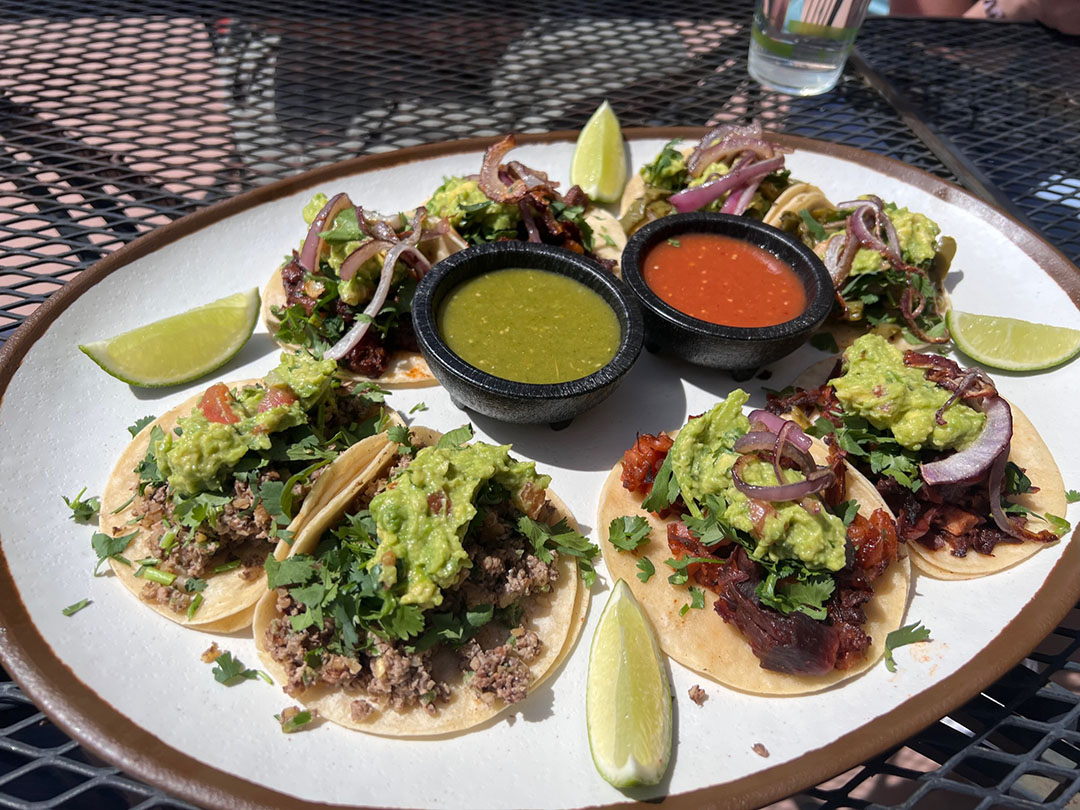 Midtown Reno
Trendy midtown is another area to find great tacos in Reno. You have a couple of spots to try.

One is Mexcal, owned and operated by Rene Preciado, who opened his own small taqueria inspired by a taco truck in Phoenix, Ariz., where he’d eaten the best taco of his life. Mexcal offers another version of the quesabirria taco with a twist on the classic. It’s stuffed with beef short ribs braised for 24 hours, so it’s unbelievably tender and melts in your mouth, and a soft, mild white cheese that Preciado, head chef of the taqueria, says is a secret ingredient. The taco is then grilled until crispy for a great balance against the juicy meat and cheese. It is served with house-made salsa and a bowl of flavorful consommé.

For a different style of taco, head over to Brothers Barbecue, around the corner from Mexcal on Center Street. This Texas-style barbecue spot offers a spin on tacos, quite different from the traditional style that our trek has included so far. Try smoked brisket tacos, or pulled pork. The meat is piled high, then served with a mild green salsa for deep flavors of Mexico. Also available is the corn and black bean relish for added freshness and crunch. If you prefer a more barbecue-oriented experience, choose to add Brothers’ house-made mild or spicy habanero barbecue sauces.

Downtown Reno
In the heart of downtown there are more tacos in Reno to be devoured.

Try out Estella Tacos y Mezcal on East Fourth Street, where chef Will Sheppard has created an innovative taco menu that changes according to what’s fresh and in season. Summer included a smoked oyster mushroom taco, for instance. But year-round you’ll enjoy tacos such as carnitas, with a delightful difference from other carnitas. These are topped with house-pickled red onions, roasted tomatillo salsa, queso fresca, and cilantro. Also try the chicken chirmol taco, known for its moist and flavorful meat. These are elevated tacos that feel like fine dining without the fuss.

Also downtown is Beto’s on Fifth Street. A favorite of ours at edible Reno-Tahoe, and a classic to the city, Beto’s combo plate and burritos are authentic and delectable. The al pastor, locally renowned by the community, is juicy and full of heat from the mix of chiles, spices, and fruit juices combined, then spit grilled and sliced. The best way to enjoy this taco is with a squeeze of lime, a spoonful of Beto’s signature fresh-but-spicy salsa, with chunks of radish on the side, placed there for cool crunchiness between bites. 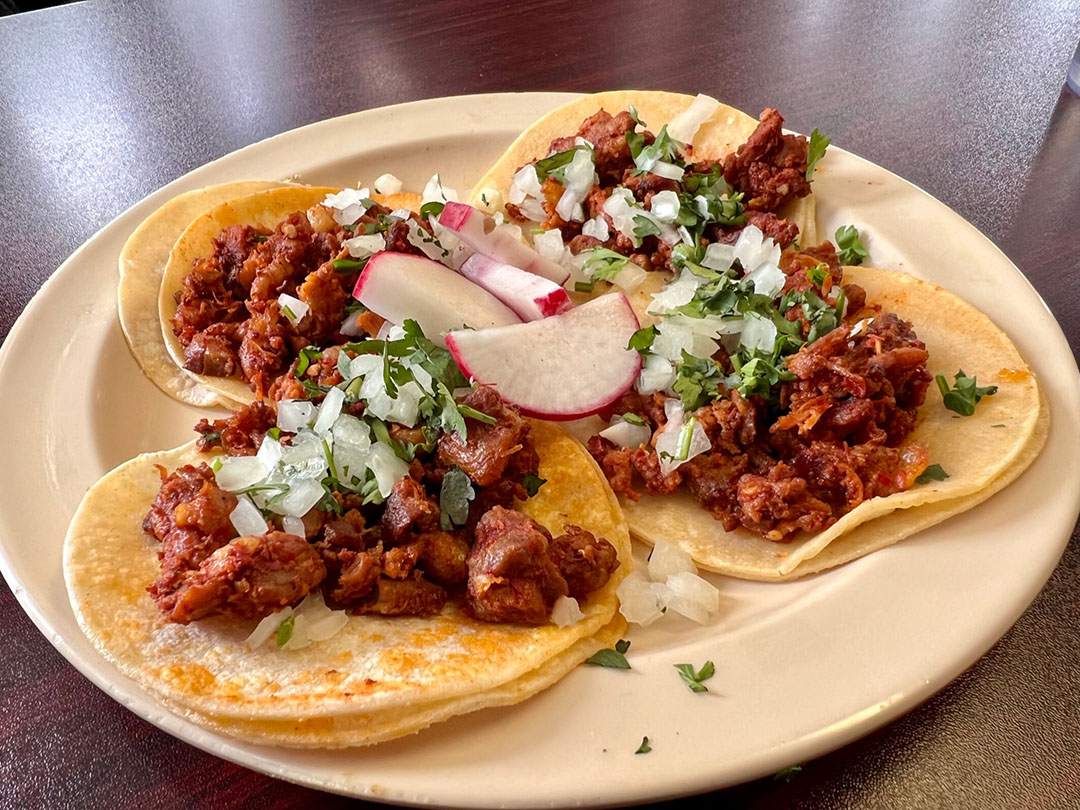 Another downtown taco spot is actually not in one spot at all. It’s a roaming food truck whose owner updates his social media on where he will be serving his highly sought-after tacos. Daddy’s Tacos NV, owned by Martin Gomez, offers three different types of taco shells, regular corn tortilla, tortilla with cheese, or a grilled mozzarella cheese shell for an indulgent, carb-free, paleo- and keto-friendly shell. An unusual taco is listed on the menu along with the variety of taco shells, the cochinita pibil, which is rarely found at most taquerias. The ancient traditional Yucatan taco is made by marinating pork in a paste of achiote, garlic, spices, and orange juice. Traditionally, it’s wrapped in banana leaves, then buried underground in a smoldering, stone-lined pit to cook over many hours. Though Gomez cooks his in the kitchen, the final result is an interesting, deliciously complex flavor that is sweet, citrusy, and hot.

West Reno
Tucked in shopping centers, West Reno tacos are almost hidden gems waiting to be discovered and become a favorite of yours.

First up is Cielito Lindo Taqueria, at Kings Row and North McCarran Boulevard in the Viewcrest Center. Chef Ashton prefers his own carne asada taco to the others offered on the menu. Ashton’s special marinade offers spice and a tangy brightness that really sets it apart from your average carne. For an even bigger play on the classic, try it as a Jalisco-style compadre red taco; the tortilla is soaked in beef fat and broth that is spiked with chiles, paprika, and other seasonings, giving it the distinctive red color.

From the Kings Row favorite, drive down to Buenos Grill in Mayberry Landing. A classic Reno resident favorite for more than 20 years, this Baja-style taqueria owned by Mimi and Greg Butler emphasizes seafood options as well as healthy preparations. Seafood is sustainably sourced and rotates based on availability. It can be paired with individual servings of Buenos’ famous house-made salsas, ranging from mild to hot, which are widely considered among the best in Reno.

These Reno tacos are absolutely going to blow your mind and your general view of tacos. For details on the places listed and their offerings, as well as spots in Sparks and Truckee to try, click here.