UNR engagement outreach coordinator finds joy in the kitchen with her son.

For KaPreace Young, the best part of cooking is getting in the kitchen with her 6-year-old son, Zaccai, and cooking the same foods she grew up eating in Reno, from hamburgers and tacos to soul food.

A silver lining of the pandemic is that Young has had more opportunities than ever to cook meals at home with Zaccai.

“He wants to get involved whenever he can. If we’re cooking breakfast, he wants to cook the eggs. If we’re doing dinner, he wants to know beforehand so he can figure out what part of the meal he can help out with. It makes me feel good to know that he is already self-motivated to want to be in the kitchen,” Young says. “I ask him, ‘What do you want to eat?’ I want him to feel like he is making decisions. It’s not just about cooking; it’s about decision-making and responsibility and accountability.”

The pandemic also has highlighted the issue of food insecurity for some students at UNR, where Young oversees Pack Provisions, the campus food and resource pantry, which experienced a near doubling of usage in 2020 due to financial strains.

“Once the pandemic hit and we had to shut down campus, we really had to reevaluate our operation and see how we could better serve our students,” Young says. “We started a temporary payment program, which was a grocery fund, and students applied and could receive $40 on a biweekly basis to cover food costs.”

“This year we took it virtual with The CW Network here locally. It was a documentary highlighting some of our community members and leaders about their experiences here in Northern Nevada and also the impact that they want to leave,” explains Young, who serves as the NNBCAS president.

Sparks-based Tresa Davis, who goes by Chef Kelly B, did a live cooking demonstration over Zoom, guiding attendees through the process of creating a plant-based meal.

“A lot of people were very receptive to that,” Young says. “So while cooking hasn’t always been a component, it showed us that people would like to see that, and it’s important to figure out how to incorporate it more into future events.”

Claire McArthur admires Young’s commitment to community involvement, teaching her son life lessons in the kitchen, and squeezing as much cheese as possible into her baked mac ’n’ cheese recipe — bravo. 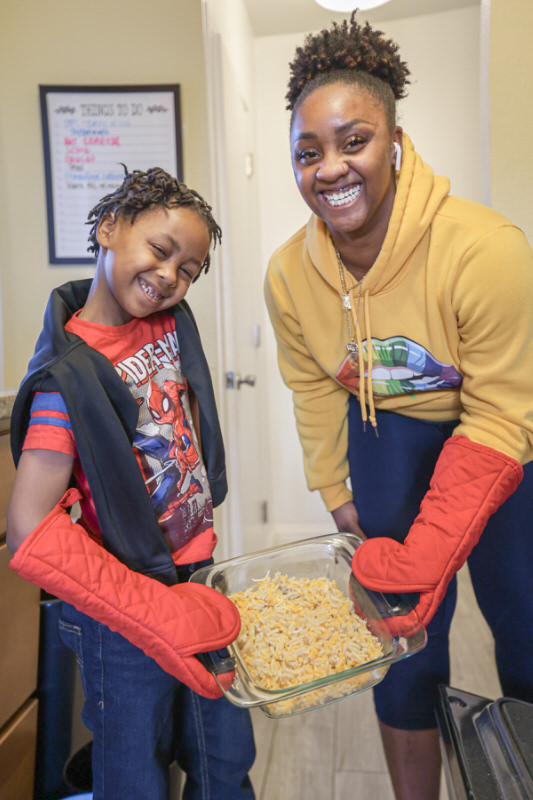 1 pound elbow macaroni, or pasta of your choosing

1½ cups each of 3 types of shredded cheese (such as sharp Cheddar, mozzarella, or Monterey Jack), separated, plus 1 to 2 extra cups for topping

Preheat oven to 350 degrees F. Cook pasta according to the box’s instructions. In a saucepan, melt evaporated milk, butter, cream cheese, and ½ cup of each type of shredded cheese, salt and pepper to taste, and a pinch of cayenne. Coat bottom of 9-by-13-inch baking dish with remaining 1 cup of each type of shredded cheese. Pour cooked pasta into baking dish, add 2 large scoops of butter, and stir together. Pour melted mixture over pasta and mix well. Cover with foil, place in oven, and bake 45 minutes. At the end, remove foil and sprinkle 1 or 2 cups of your remaining shredded cheese choices on top and do a quick broil until melted and golden.