One Mile High and Rising

From hip hop to hors d’oeuvres, Coltrane to Cubanos, Moody’s has it all.

Standing about 600 feet taller than Denver, the famous “Mile-High City,” and with just a fraction of its population, Truckee is tiny but mighty. Its picturesque, historic downtown spans only blocks and is backed by epic peaks. Walk eastward down Donner Pass Road and you will come to Moody’s Bistro, Bar & Beats. Look just beyond its black-and-white-striped awning and you will see the stores quickly fading into an expanse of nothingness, poised for future development. It’s coming. The people are coming. But for now, there is excellent food, exceptional cocktails, and ’90s hip hop, all in one place. Come in, relax, and stay for a while.

Moody’s offers a refreshing respite from the status quo; walk inside, and you will note a little bit of speakeasy, a little bit of art deco, a little bit of now. It’s all here, including excellent food and music — a pairing not normally found. This fact is highlighted by Moody’s managing partner, J.J. Morgan, former San Francisco resident and owner of its SOMA District’s jazz and hip hop destination, Up & Down Club, which flourished in the ’90s.

It’s a bright Truckee December afternoon, and Morgan has chiseled out a bit of his precious time during Moody’s busiest crunch of the year to share the French-inspired bistro’s history, its current endeavors, and some exciting plans for the future.

“When we first opened this place, there was a lot of pushback,” Morgan says. “The community thought we were like the spear of the gentrification, or of the invasion — and we were the new swanky place.”

As Morgan leans back in his chair, he has a metronomic quality, relaxed and seemingly unflappable. It’s hard to imagine him ever raising his voice. Perhaps his calm demeanor has something to do with raising two boys, Kingston and Toussaint (the youngest is only four and a half years old), or perhaps it’s due to his decades of work experience. At 54 years old and with more than 30 years in the game, he is seasoned in the music and food industries. He is now a self-described “big-time family guy,” relishing every moment spent with his wife, Mariann, and children in Truckee.

Shortly after moving to Truckee from San Francisco in 1999, Morgan met chef Mark Estee at Lahontan, a gated community in Truckee, and they developed a food-and-beverage program for its central restaurant, The Lodge. The two became close and later embarked on their own endeavor in Downtown Truckee, occupying the historic Truckee Hotel, built by John F. Moody in 1873.

Moody’s opened in 2002, and though business was good at first, “It was just weird — we got labeled as a special occasion place,” Morgan says.

In 2010, Estee moved on to pursue other projects. In an effort to make the Moody’s menu more accessible, Morgan added pizza and hamburgers. The quality of the ingredients shines through with each bite. The ahi poke is outstandingly fresh and bright, the crab buttery and flavorful, the bone marrow rich but not overpowering. There is special care and attention to detail, even on something as simple as a Margherita pizza. All dishes are beautifully balanced.

Though Estee is gone, his legacy lives on.

“Mark was a key part of the farm-to-table program and establishing connections with local farmers,” Morgan says. “Chef Will Burns then carried that on. We’ve always had a relationship with all the farmers … We have a retired fireman who, during salmon season, goes to Bodega Bay and catches wild king salmon and brings it to us. We have a dude who brings us wild foraged mushrooms. Sierra Valley Farms brings produce.”

In 2011, Morgan started Moody’s Jazz Camp, a 501(c)(3) jazz and hip hop summer camp for youths ages 10 to 18. Tuition is free to locals, and no one’s ever turned away. For five days following the Fourth of July, musical fellows from around the globe — former connections from Morgan’s time running clubs — travel to Truckee for an intensive five-day workshop with budding musicians. Fellows have included Adam Theis (the camp’s musical director), Peter Apfelbaum, Will Bernard, MCs Radioactive and Soulati, DJ Romanowski, and John Ellis, to name a few.

“The whole concept is to bring a more urban cultural aspect to kids living in this more rural area,” Morgan says.

“Chef Will Burns is coming back, after leaving in 2018,” he says. “When he was here, he took us to great heights.”

Looks like things are looking up for this sweet little mountain hub. Stay tuned.

Cameron Cox is a local landscape designer, urban farmer, and personal chef. In her free time, she can be found exploring with her dogs, Dutch and Bandit, geeking out on plants, and pretending cheese is kale. 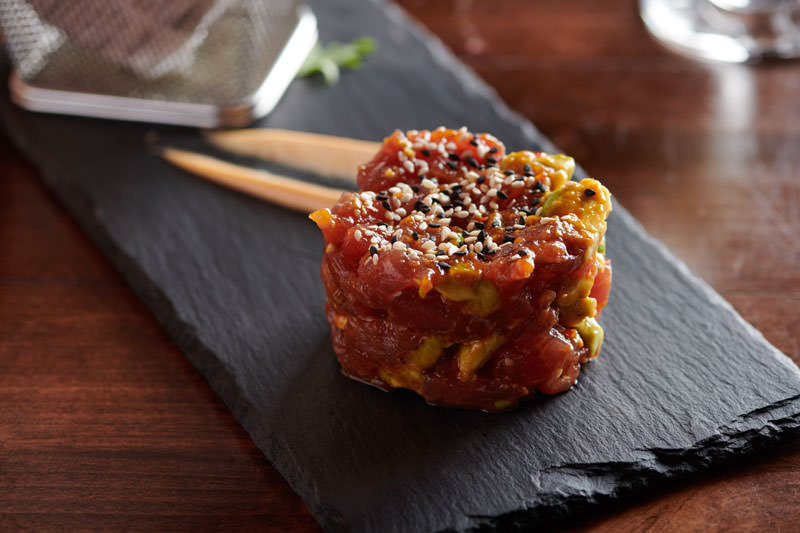 Combine all ingredients and add to ahi poke recipe.

Combine all ingredients and serve as dipping sauce with ahi poke.