With help from a Nevada nonprofit, a cluster of Carson City restaurants known as the Green Dining District is making strides in mitigating its impact on the environment.

Founded in 2008, greenUP! advises Nevada business owners on how they can cut down on waste, reduce consumption of valuable resources, and fight climate change in a way that benefits not only the planet, but also their bottom lines.

The Carson City-based organization works with all types of businesses, but in 2018, it received a grant from the Nevada Division of Environmental Protection to launch a program that specifically aims to green the restaurant industry in Carson City.

“Your average full-service restaurant can create more than 2,000 pounds of disposable waste a week, and 90 percent of a restaurant’s waste could be recycled or composted,” explains Donna Walden, president of the greenUP! board.

By 2019, owners of 10 restaurants on North Carson Street had agreed to be a part of the pilot program, and greenUP! created the Green Dining District.

Waste Not, Want Not

To start the program off, restaurants participate in a three-day waste audit to understand where their garbage is coming from.

“We separated our trash into different receptacles for three days based on what kind it was, be it pre-food scraps or plastic or cardboard, and we kept a log,” explains Jen Robbins, who was manager of the Carson City location of Squeeze In at the beginning of the program. “It gave us a big look at how much waste we had, and at Squeeze In, a lot of it was food, surprisingly. Potatoes were a big one. Not only were we wasting a lot of food, but we were losing out on the profits of it as well.” 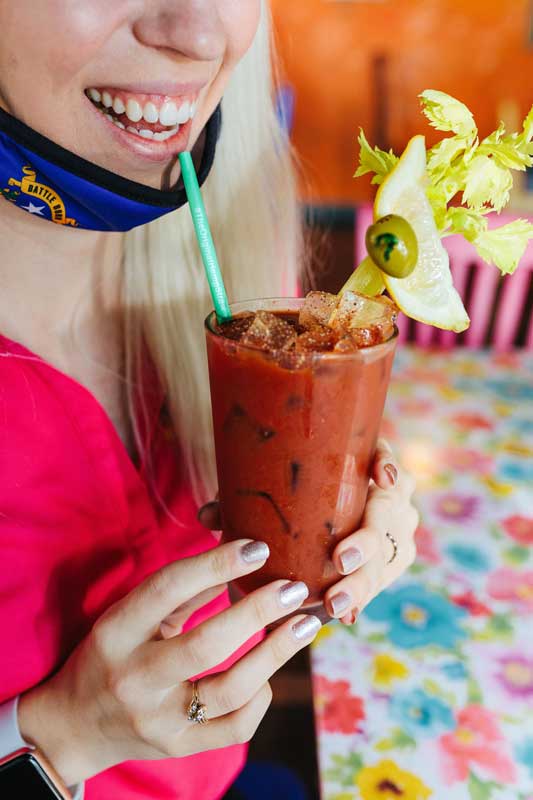 Kay Salerno, vice president of Squeeze In in Carson City, demonstrates one of the restaurant’s new compostable straws made from hemp

“Six of those restaurants in our pilot program agreed to have a farmer come pick up their food waste daily to feed to his pigs, and that significantly reduced the amount of food waste that went into the garbage,” Walden says.

GreenUP! works with restaurants to find solutions to waste issues unique to their establishments — such as switching to compostable containers for take-out-heavy restaurants — as well as universal issues facing the industry.

“There’s a tremendous amount of cardboard. If you were to put that in a recycle bin, it takes up a huge amount of volume,” Walden says. “It’s an expensive recycling bill for restaurants. We’re looking at a possible solution for cardboard. We don’t know what that is, but we’re researching it right now.”

Later in the program, greenUP! conducts a second waste audit to see how the training and new practices affected the amount of waste going into the landfill.

Over the course of the program, the restaurant managers drastically reduced their food waste and went from throwing all material away to establishing a recycling program.

“It was an eye-opening process,” Robbins says.

In the coming year, Walden hopes to onboard seven more restaurants for the program and eventually create Green Dining Districts in communities across Nevada.

“We’d like to expand it to South Carson, then we’d do it community by community throughout Nevada,” Walden adds. “We know that restaurants have been hit hard by COVID-19 and are already challenged with the low profit margins that they have, so I really want to encourage people to frequent these restaurants that have made a commitment to the environment.”

For details about the Green Dining District and a list of participating restaurants, visit Greenupnow.biz/green-dining-district.

Claire McArthur is a freelance writer who fully supports a restaurant’s decision to reduce French fry portions for the sake of the environment’s health (and her own). You can reach her at Clairecudahy@gmail.com.