Garrett Menghini was living in Los Angeles and “drinking the CrossFit Kool-Aid” when he had a revelation: If he really wanted to take charge of his health and know his food, eating organic, seasonal produce from farmers’ markets was not going to cut it.

“It seemed more time consuming, but growing my own food seemed like the best option for my own health and the best way to know the story my food was telling,” Menghini says.

The former SpaceX engineer moved back to Washoe Valley in 2017 and built a large garden on his parents’ five-acre property. 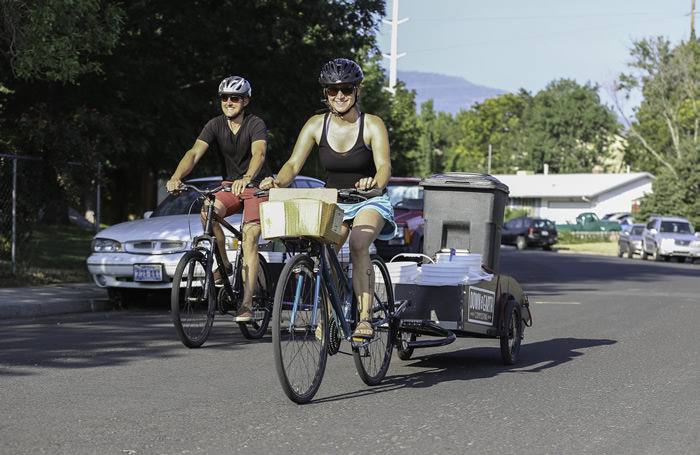 On their bicycles, Garrett Menghini and Tinian Vandergriff collect food waste that will be turned into usable compost

“Within the span of about a week, I had two people ask me if I could do the same for them,” Menghini says. “Down To Earth started around that idea of taking the guesswork out of gardening for others who valued the quality and true story of their food as much as I did.”

“The idea of community composting in Reno was started by a group called the Reno Rot Riders,” Menghini says. “They started off with that service in 2015, and it basically was a 100 percent bike-powered residential food waste collection.”

Down To Earth took over the service from Reno Rot Riders in February 2018, and it now collects food waste on bicycles from around 75 customers every week for $18 a month. Twice a year, the customer receives a delivery of finished compost.

“The synergy between the backyard gardening and composting was too strong to ignore,” Menghini says. 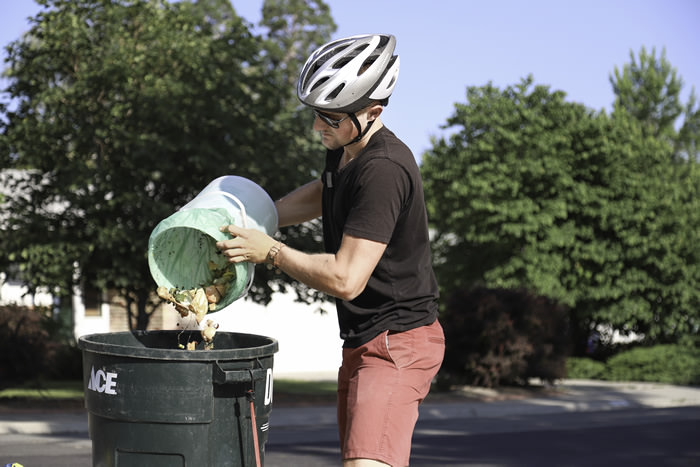 Though custom gardens with the option for regular maintenance by Down To Earth still is an important part of the business, Menghini says his goal is to focus more on the composting service going forward.

“The state and county have some pretty stringent requirements for composting facilities, so we have to haul the food waste out to Full Circle [Compost] in Carson City or RT Donovan in Spanish Springs. We’d like to get away from that and find a way to keep resources local,” he says. “We are really excited about diverting food waste from the landfill and using that to build healthy soil in Nevada.”

Claire Cudahy is a writer and foodie based in Reno-Tahoe. She loves sourdough bread and storytelling and hopes to one day live on a farm where animals outnumber people. She can be reached at Clairecudahy@gmail.com.

For details about Down To Earth, visit Dte-gardens.com.