After another April day of sheltering in place and dismantling her fitness business since closing due to COVID-19, Brenda Simpkins made herself a lemon drop martini and stepped out onto the balcony of her home in South Lake Tahoe. With fluffy clouds and a clear view of Mt. Tallac in the background, she set her cocktail on the railing, snapped a photo, and shared it on the 45,000-follower-strong Facebook group, I Love Lake Tahoe. To her surprise, the likes and comments began to roll in.

“People commented and asked me to do more drinks,” Simpkins recalls. “For several days, I created a new drink each day and posted it, but then one day I was kind of tired and didn’t feel like doing it. [My fiancé] Mike was on I Love Lake Tahoe, and he said, ‘Oh my gosh, Brenda, they are calling you out!’ People were asking, ‘Where’s Brenda? Where’s the drink?’”

Previously, Simpkins only enjoyed the occasional cosmopolitan, but she soon found herself researching drink recipes and techniques online and posting snapshots of her latest libations on her balcony several times a week. She soon created her own Facebook page, Cocktails on Brenda’s Balcony, which now has 2,300 followers.

From lavender lemonade mojitos to strawberry shortcake martinis, Simpkins’ concoctions included many she created herself as well as some recipes submitted by her “balcony friends.”

Among the exclamations of “delicious!” and “can’t wait to try!” were more heartfelt comments pointing to the welcome distraction of this glimpse into Simpkins’ serene balcony view. “I love being a part of this wonderful little group,” one woman wrote. “Thanks for bringing us a little peace during this uncertain time,” penned another.

Simpkins estimates that around a quarter of her followers are local to Tahoe while the rest have visited Tahoe before but live around the country and as far away as Australia. Like a virtual, communal happy hour, people share photos of what cocktails they are drinking — including recreations of Simpkins’ recipes — in the comments sections of her posts. One follower even mailed her a vintage highball glass featuring an etching of Emerald Bay.

“You can’t even believe the amount of love I get from these people. They are so precious. It has seen me through COVID and through losing my business. They feel like friends,” Simpkins says.

So when people started requesting that she turn her photos and recipes into a book, she got to work. In October, Simpkins self-published her recipe-meets-coffee-table-book, Cocktails on Brenda’s Balcony: A Journal of Libations During Shelter-in-Place in Beautiful South Lake Tahoe. In chronological order, the 54-page book highlights the balcony photos and cocktail recipes that she’s shared since April, along with a few quoted Facebook comments from her followers. It also includes instructions on how to infuse your own alcohol with various fruits and herbs.

To show support for the book, Tahoe Blue Vodka — Simpkins’ choice of spirit long before she reached out to owner Matt Levitt — made a donation to Tahoe Fund, a nonprofit that supports recreation, conservation, and stewardship in Lake Tahoe, in Simpkins’ name, at her request.

“This had everything to do with sheltering in place and COVID,” she says of her social media success. “People out of work. People exhausted who have to work through this wearing masks all day. It was this bright spot. I don’t understand it that much — why it means so much — but it does. And it does to me, too.”

To join the community of balcony friends or purchase/find details about her book, find Cocktails on Brenda’s Balcony on Facebook.

Claire McArthur, like so many of us, has a love-hate relationship with social media. She was thrilled to find such a positive, supportive place on the Internet revolving around a love of cocktails and Lake Tahoe. 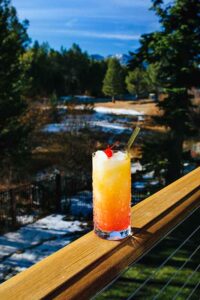 Fill shaker half full of ice. Add pineapple vodka and orange juice. Shake and pour over ice in a tall glass. Add maraschino cherry juice. Do not stir. Garnish with a wedge of orange.

Fill a clean Mason jar ⅓ full with freshly cut pineapple, then fill the rest of the jar with vodka. Seal tightly and store in a cool dark place, like a pantry. Infuse for 5 to 7 days. Each day, turn the jar over and back upright. When the vodka is ready, remove pineapple with a slotted spoon and discard. Pour vodka through a strainer to clarify it and return to the Mason jar or other container for storage.