The Bus Boy takes the food truck to a higher level.

The Bus Boy is several steps above your average food truck — literally. Built from a double-decker bus from Bristol, England, the blue bus not only stands a level taller than other mobile eateries, but it offers what other food trucks can’t: an escape from inclement weather.

“I decided to open a double-decker bus food truck because it was different,” says Billy Lavelle, The Bus Boy’s owner. “People could enjoy it all year long. We can control the environment and can seat 28 people upstairs.” 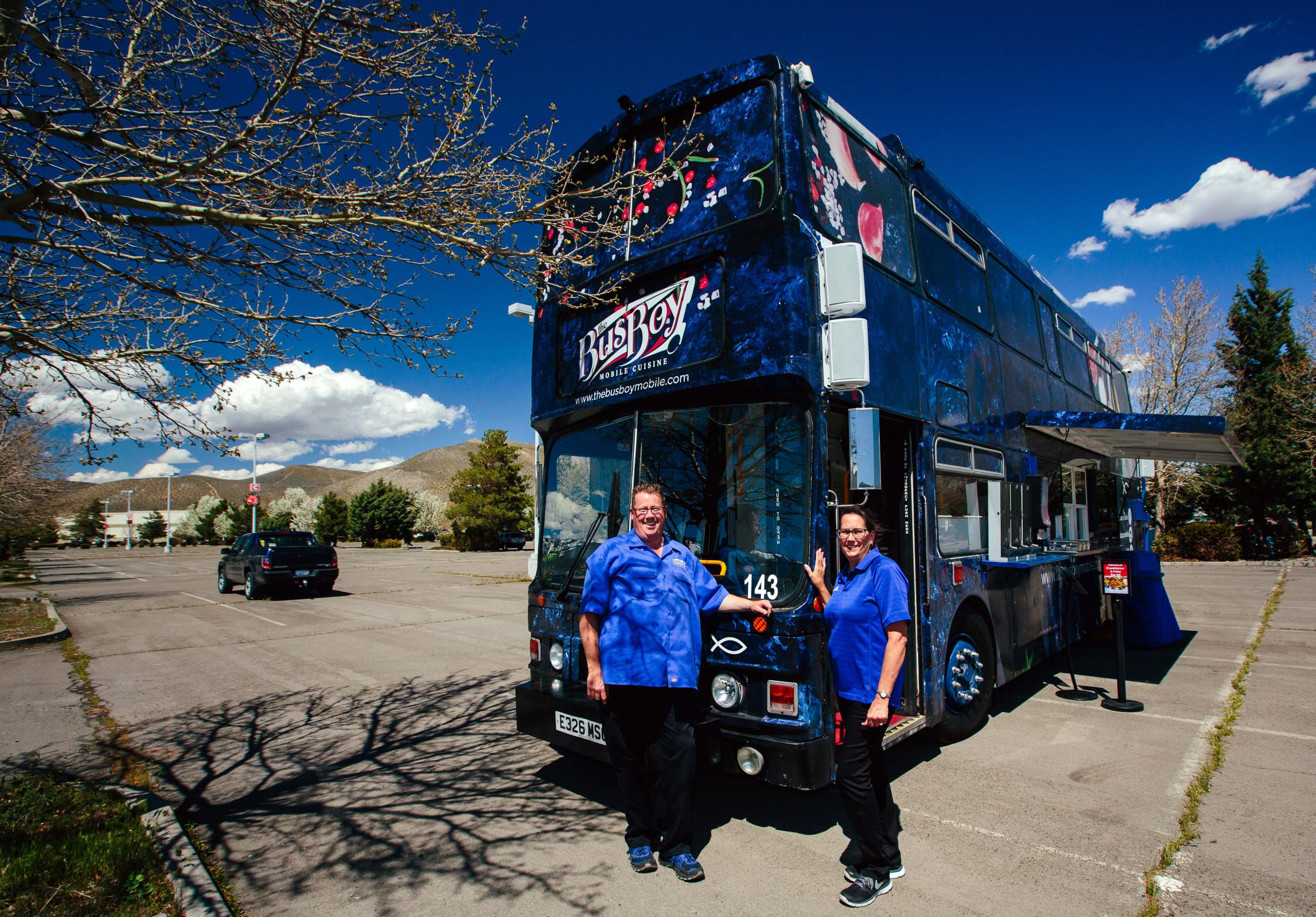 Billy and Laurie Lavelle turned this double-decker bus into a year-round food service truck and restaurant.

A voice from above

Converting a double-decker bus over the course of three years came with a unique set of challenges, but Lavelle says the lofty idea came from a higher calling.

“I got the opportunity to retire early, and God just put it in my heart to open a food truck,” Lavelle says.

In his former life, Lavelle worked as a store director with Raley’s Supermarkets. Originally from Queens, N.Y., Lavelle did not run any food businesses in the city, but he says that he “did a lot of eating there.

All The Bus Boy’s food is made from scratch and prepped at Lavelle’s church, Calvary Chapel, before being loaded onto the bus for cooking by chef Avangella Mendez and her line crew. A small staff runs the outside window and front serving counter and delivers food to the upper level.

A double-decker bus always was Lavelle’s first choice. He purchased the bus from British Bus Co. in Southern California. The bus originally serviced a 40-stop route in Bristol, and its former schedule is posted in the waiting area.

Yes, if the weather is frightful, you can wait for your food on a comfortable couch behind the driver’s seat. A takeaway window on the bottom level is available, but the appeal is being able to climb the original spiral staircase to the top level for 360-degree views. Rather than bringing the food up to the upper level via the staircase, The Bus Boy staff is aided by a dumbwaiter. 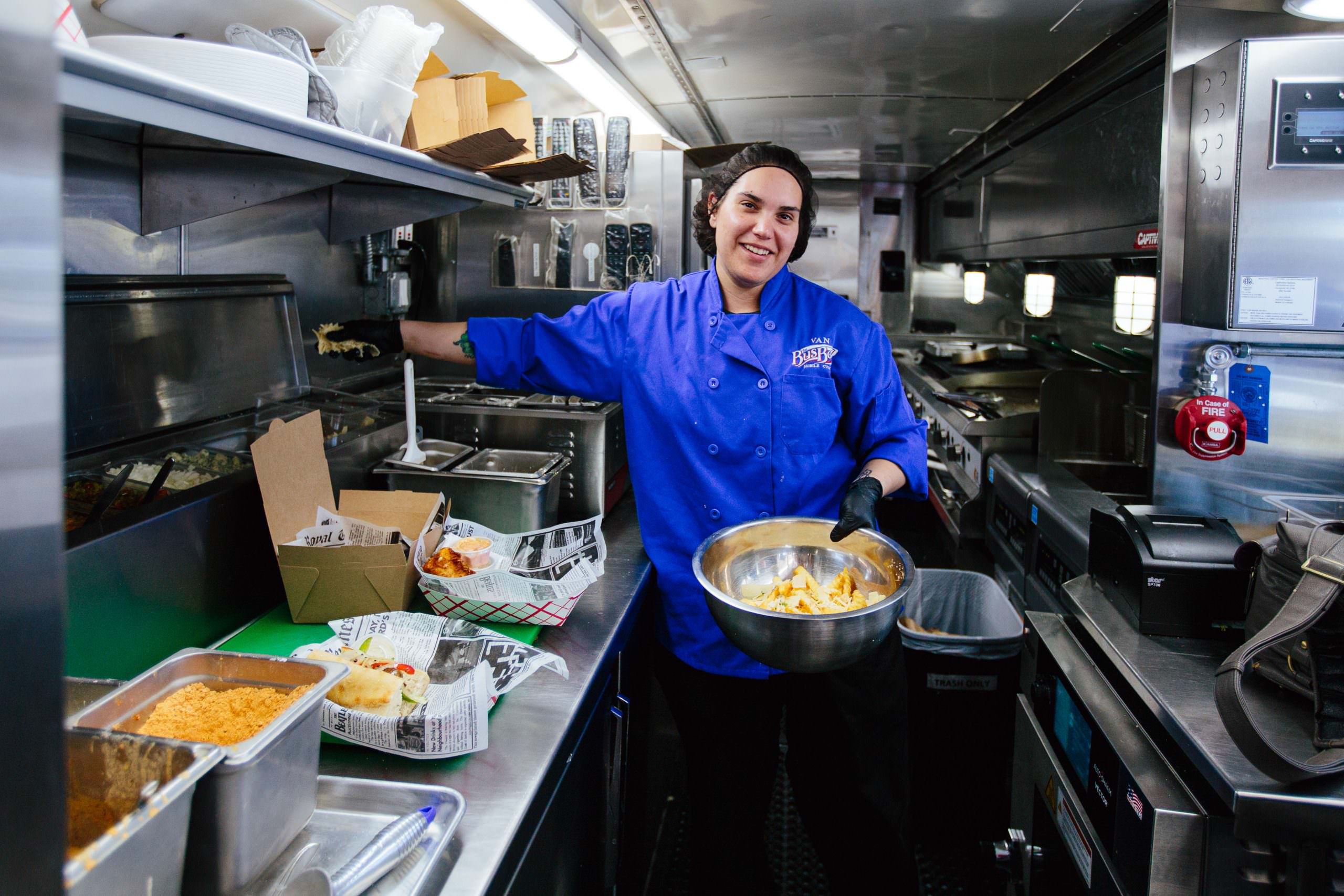 While driving and towing such a large food truck can be tricky, Lavelle loves the beauty of mobility.

“The relationship I’m building with other businesses in town is awesome,” he says. “They’re now asking for me. We’re making it mutually beneficial.”

The menu veers toward British pub grub but has Nevada taste and style. It includes both beef and salmon Wellington and grilled chicken, as well as cowboy steak featuring Minden-based Bently Ranch’s grass-fed beef. The fish and chips features a larger six-inch cut of fish; your choice of chips includes garlic Parmesan or carrot/parsnip fries. The Bus Boy’s desserts include coffee cake from Carson City’s L.A. Bakery Café & Eatery and ice cream by Reno’s Icecycle Creamery.

“I tipped my hat to the British pub food scene, but I also wanted to go after local sources and support local businesses,” Lavelle says. “I also wanted to feature desserts, and Donuts to Go in Carson makes the best fritters I’ve ever had, so they make a special-sized apple and blueberry fritter for us.” 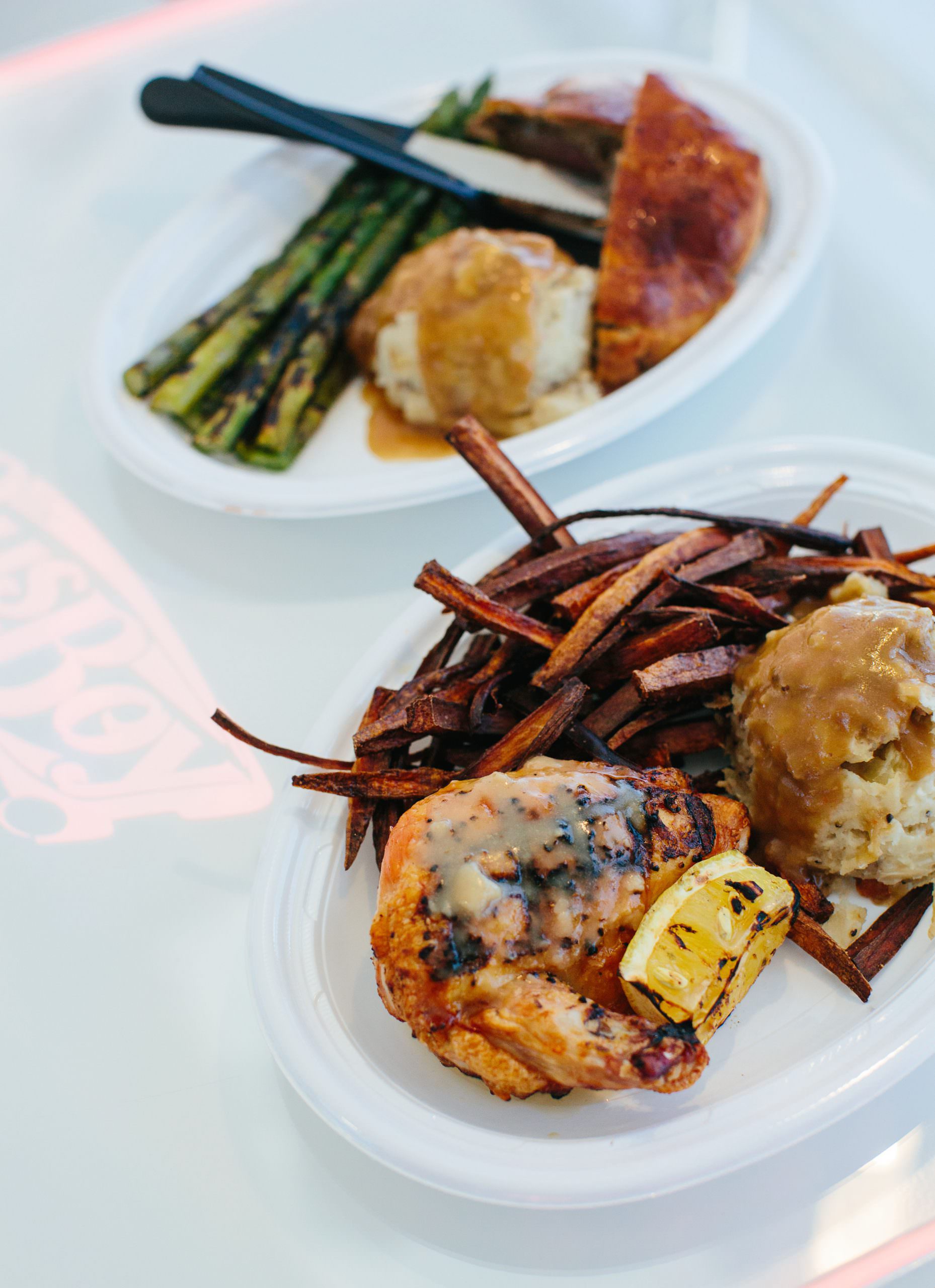 The most popular menu items are the sliders. The lamb sliders with duck fat are especially popular; they’re served with pickled red onions and tzatziki sauce.

“I don’t think too many people order cowboy steak off a food truck, so I think the appeal is to be able to serve something higher end,” Lavelle says.

The Bus Boy parks at various locations in Carson City such as the Grocery Outlet, Northern Nevada Coin, and the Brewery Arts Center. Reno is in Lavelle’s sights, but the bus’ height — nearly 16 feet — presents challenges with wind in Washoe Valley and difficulty fitting under the I-580 bridge (if forced to take the Eastlake Boulevard alternate route). It’s closed on Sundays.

“We are hoping the bus brings more people to the community,” Lavelle says. “That’s the heart of The Bus Boy.”