Squeeze In grows into its 10th location.

Eating at a Squeeze In restaurant is like going to a relative’s house for a big family meal. Except at “the Squeeze” (as it’s sometimes affectionately called), you can draw on the walls, and no one expects you to help with the dishes.

“We felt that welcoming feeling when our parents would take us there as kids for breakfast on the weekends, when it was just a single location up in Truckee,” says Shila Morris, president and co-owner. “It was just a really special place. The atmosphere and ambiance were unforgettable and charming.”

Morris and her sister, co-owner and vice president Kay Salerno, strive to infuse each of Squeeze In’s locations with that same vibe.

“It’s been really fun to keep that feeling of, ‘Come into our house, have a big meal, and leave feeling a little tired and definitely full, and maybe a little fuzzy from a mimosa,’” Morris says. “Your kids had a good time, and you signed the wall, and you listened to some good tunes — that’s what it’s all about.” 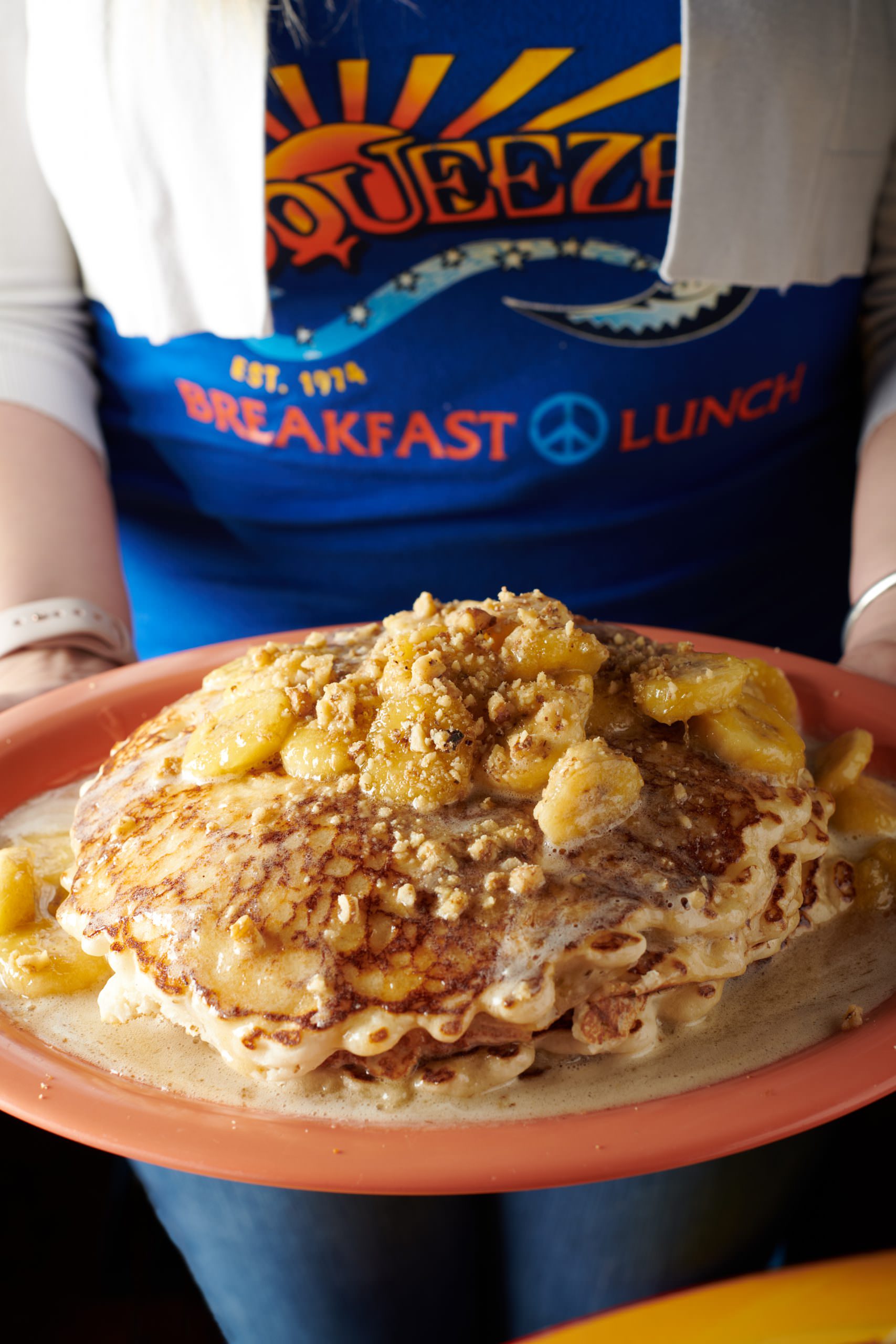 The Jack Johnson Banana Walnut Pancakes features a stack of fluffy buttermilk pancakes with walnuts topped with bananas sautéed in butter and honey.

All in the family

Morris and Salerno’s parents, Gary and Misty Young, bought the original Squeeze In located in Downtown Truckee in 2003, fulfilling a longtime dream to own the 39-seat restaurant that opened in 1974.

Now, Squeeze In has nine locations in Northern Nevada, California, and Las Vegas, with a 10th set to open in March in Carson City.

“That’s just very symbolic for our family and exciting,” Morris says. “To be into double digits is a dream we’ve had for a long time.” 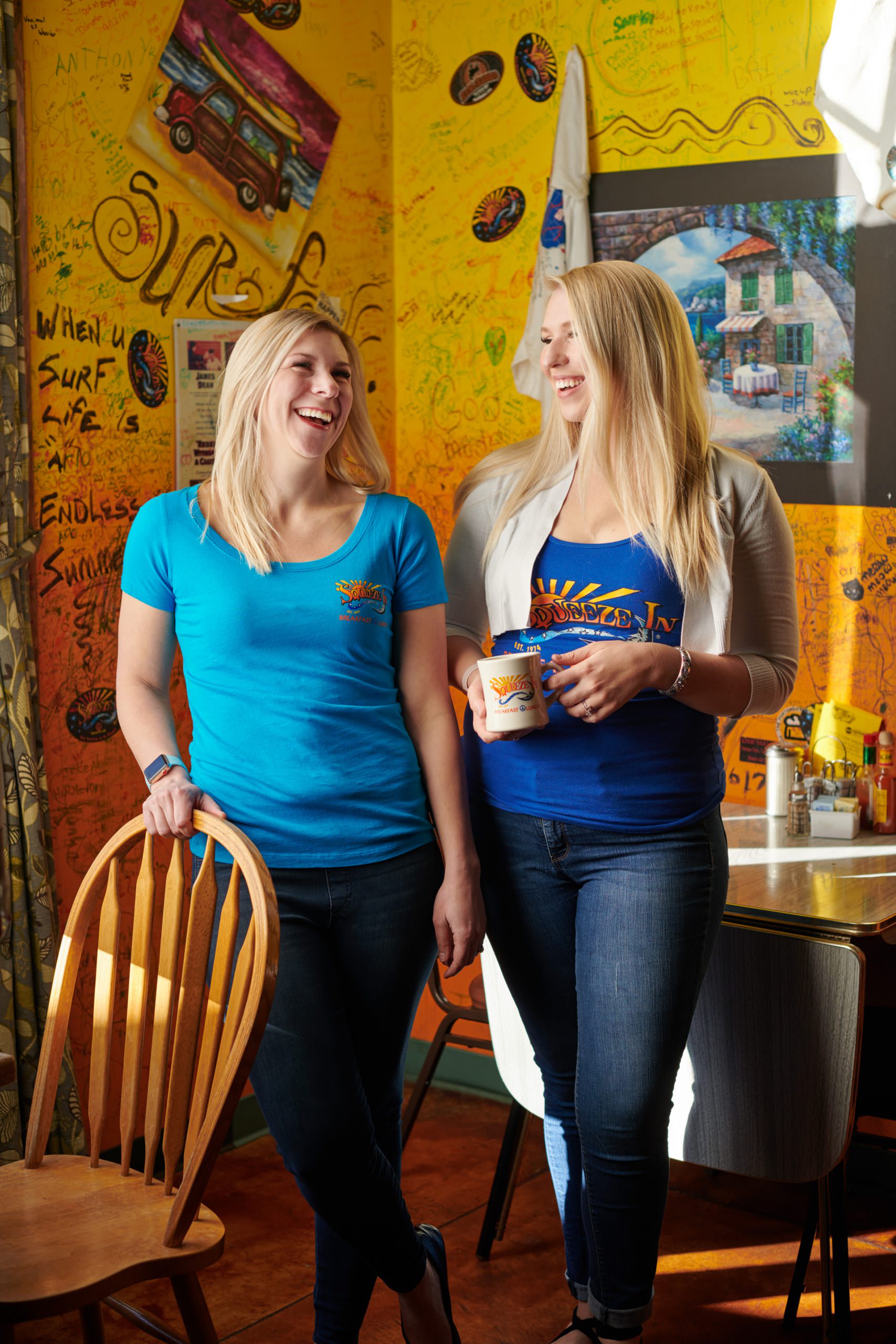 From left, Shila Morris, president and co-owner, and Kay Salerno, co-owner and vice president, are the two women behind Squeeze In restaurants.

Of the company’s locations, four are franchises, which also are run by families, Salerno says, explaining that bringing the original Squeeze In experience to each franchise location is crucial.

“We train every single person who comes to work at Squeeze In with a strong sense of culture,” Salerno says. “We do our absolute best to help instill in them a heart to serve, to grow, and to help build those communities.”

While Squeeze In’s menu boasts the “best omeletson the planet” (Misty even competed on Throwdown! with Bobby Flay in 2010), the restaurants offer a breakfast, brunch, or lunch option for every preference and dietary need. The eight-page, spiral-bound menu includes a diverse array of dishes, from an indulgent king crab Benedict (which Morris and Salerno only allow themselves on Mother’s Day and their birthdays) to vegan and under-500-calorie options. 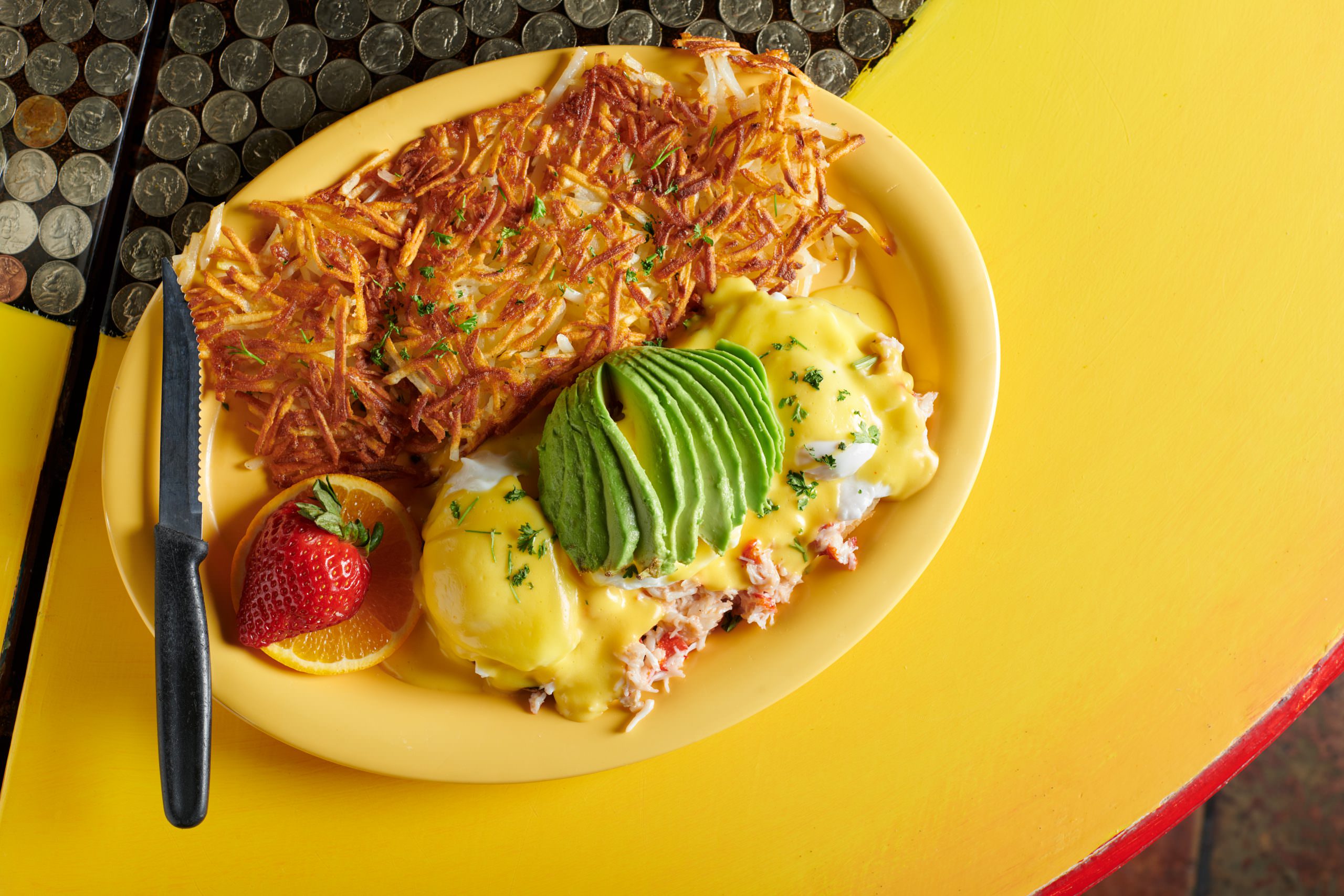 “Our family’s like that,” Salerno says. “Our parents are vegans, I’m gluten free, and Shila’s vegetarian half the time, and we all have different dietary needs. So, sitting down around the Squeeze In table, you have the options that you would find sitting around our own family dining table.”

In the past 15 years, the family has cultivated and curated the menu by removing some items (at one point it included more than 57 omelets) and adding French toast, burgers, and a variety of eggs Benedicts. But, initially, the Benedicts were a hard sell to the family.

“We never really grew up with eggs Benedict, because it seemed like a dish people would eat at fancy parties or fancy brunches, and we just weren’t fancy people,” Salerno says.

Eventually, after many customer requests, the family added its “Bennys” to the breakfast repertoire. Now, they’re among the most popular items on the menu.

“We can’t keep them in the door some days,” Salerno says. “We were all so resistant, so that’s a fun little addition that just comes with our story.”

Even as the dishes have changed over the years at Squeeze In, the kitschy décor and inviting atmosphere have stayed constant.

Each of its locations boasts an eclectic collection of decorations on its walls, which all are covered with signatures of diners, family members, and friends. Rock ’n’ roll tunes fill the air in the dining area, although family conversations and the clinking of kitchen utensils often drown out the music.

“It’s something we’ve embraced and loved,” Morris says of the décor and atmosphere. “It gets a little messy, but aren’t life and family a little bit messy?”

Annie Flanzraich is a freelance writer and editor based in Reno. Her favorite omelet at Squeeze In is the Racy Tracy.

Each year all nine Squeeze In restaurants make bunches of brunches, breakfasts, and lunches.

“We’ve got a lot of eggs flying, and potatoes chopping, and mimosas flowing,” says Shila Morris, president and co-owner.

To do that, they use about:

In fact, the restaurants are the No. 3 user of Champagne in the market, says Kay Salerno, Squeeze In’s vice president and co-owner. 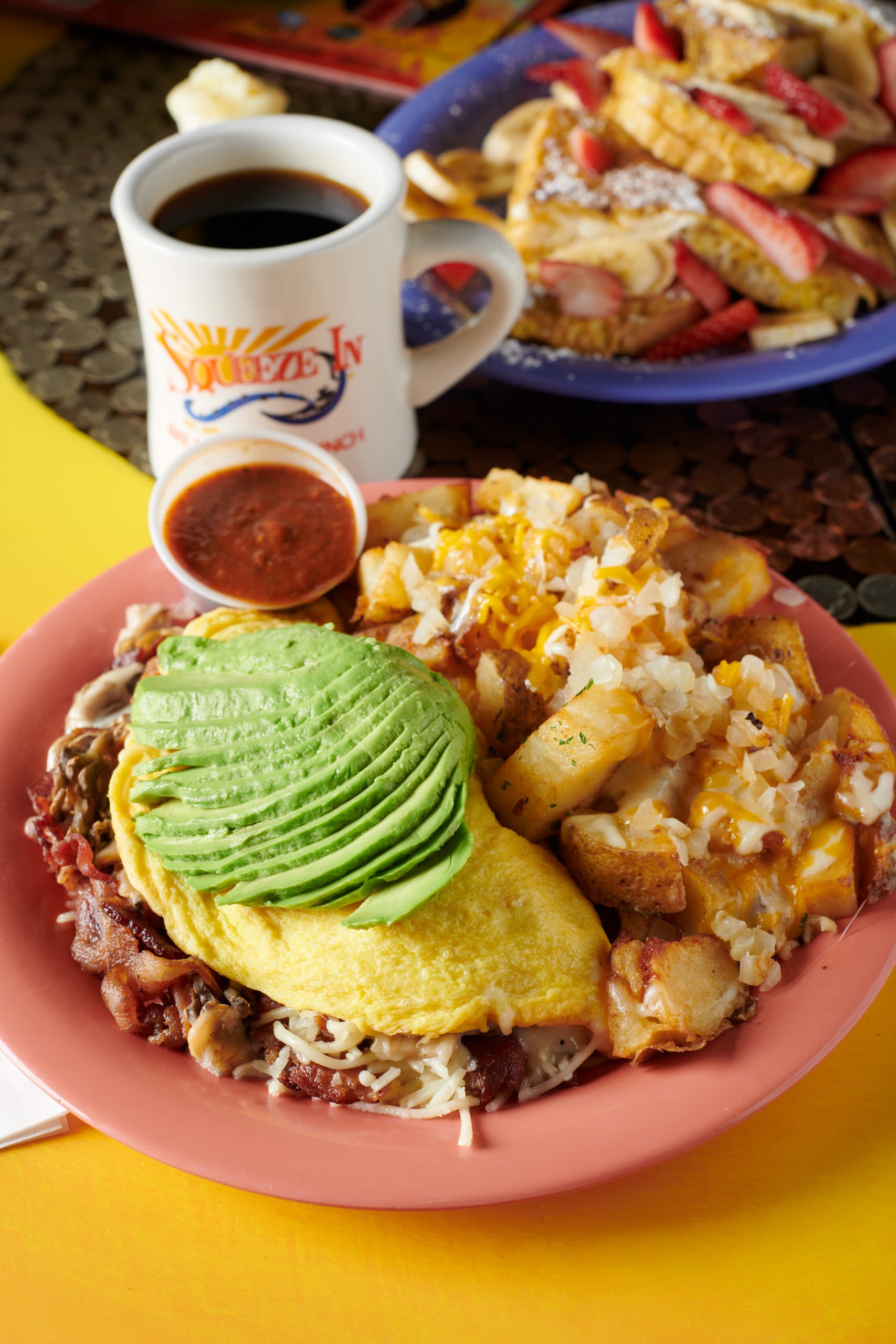 The Racy Tracy omelet was featured on Food Network’s Throwdown! with Bobby Flay

This quintessential California omelet is Squeeze In’s No. 1 seller, Morris says. “It’s just so classically good and never gets old.”

¾ cup white wine with a dash of soybean oil added

Sauté mushrooms and avocado in white wine mixture and quickly bring to simmer. Let simmer for 3 to 4 minutes. Cover and let sit.

Immediately turn off flame. Distribute Monterey Jack cheese to one side of omelet.

Use lid from sautéed avocado and mushroom pan to drain remaining white wine sauce. Spread those ingredients over Monterey Jack cheese. Layer chopped bacon on top of avocado, mushroom, and cheese. Fold the omelet in half and serve.