A is for Arario and its A-plus food and chef. For its ambience and amiable staff. These are the ingredients that built an enthusiastic fan base with five-star ratings on social media sites from Facebook to Yelp. Word-of-mouth praise helped, too.

Opened two years ago, the Korean restaurant took a while to catch on. Many Reno folks weren’t as familiar with Korean cuisine as they were, say, with Chinese. But with Arario’s uptown atmosphere, detailed menu, and well-trained staff guiding the uninitiated, the place soon landed on Midtown’s culinary map. 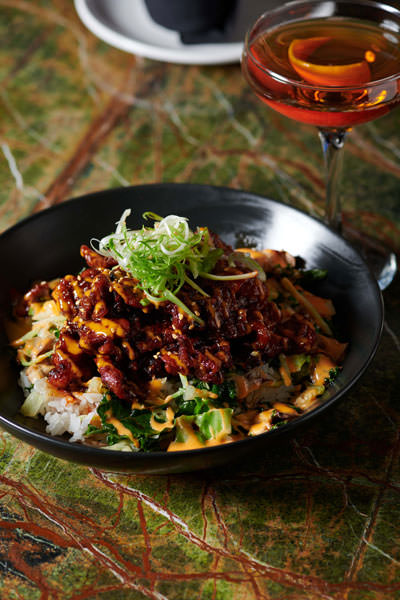 This bulgogi bowl features spicy pork over rice and vegetables. It’s served here with a Cloud Nine cocktail, Arario’s spin on a Manhattan

“Our goal was to have a place where you come in, sit down, and relax,” says TJ Cho, co-owner of Arario with Hani Cho, his wife and the restaurant’s chef. Both are from South Korea, though TJ, at 16, immigrated to Reno with his family in 1998. Hani briefly spent time in Reno in 2006 for a stint as a student culinary intern in a Reno hotel. She returned permanently to Reno in 2015 when the couple married.

Arario’s soul is Hani and her kitchen. A culinary graduate of Osan University in South Korea, she is as well versed in her heritage’s traditional foods as she is in creating contemporary, fusion-inspired dishes. Arario’s heart is TJ, the guy who doesn’t miss a beat as front-of-the-house manager, or as the go-to volunteer bartender, server, or whatever else the place needs. 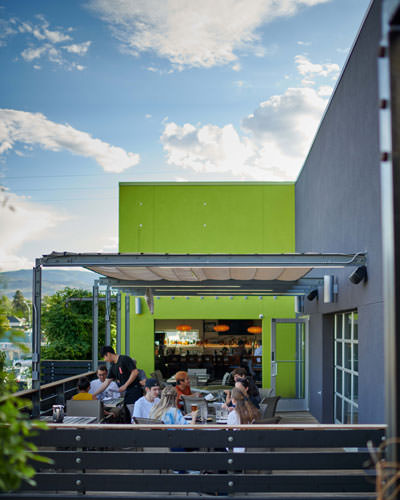 TJ often greets customers near the gorgeous, curved, Brazilian granite bar — on weekends, the action is lively. The full bar serves craft cocktails, draft beer, and wine, and it is well-stocked with a variety of soju (a Korean liquor) and whiskey. Small plates to pair with your drinks should not be missed. 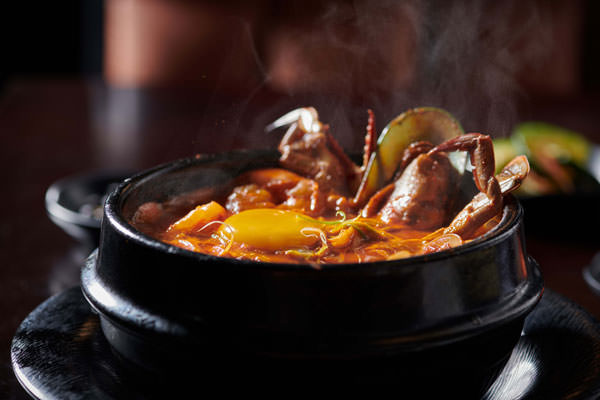 Korean cuisine is a tantalizing tango of flavors, starting with ginger, garlic, soy sauce, and sesame oil. Other ingredients, such as gochujang, Korea’s famed chile sauce, fire up the taste buds. And that’s just the beginning. A balancing act between pungent and sweet, spicy and mild awakes umami. But don’t rely on my say-so: See for yourself.

Among the classic dishes, one excellent choice is Korea’s national dish, hot pot bibimbop (often known as bibimpap). Stir-fried vegetables top a bed of sizzling rice; a fried egg crowns the whole dish (with gochujang served on the side). The way to eat this dish is to mix it all up — spooning in gochujang to your taste. The broken egg offers moist creaminess, and crispy rice from the bottom adds crunch. It’s the best. 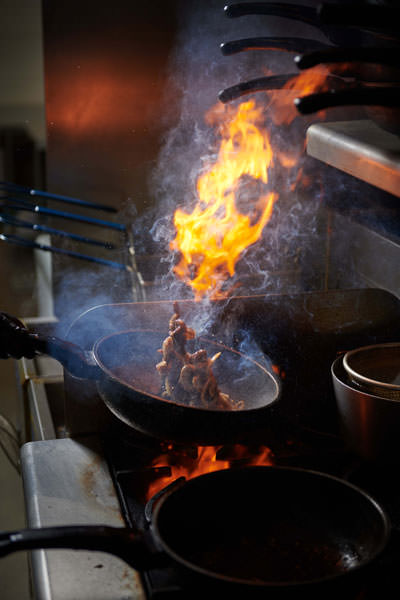 Honors also go to hot pot beef bulgogi — thin-sliced marinated beef with sweet potato noodles and mushrooms in a full-flavored, house-made beef broth. Tasty, especially with a dollop of gochujang. A variety of side dishes, varying daily, accompany your entrée. Kimchee is the constant, but whatever else arrives adds a fresh complement to the meal.

Chef Hani uses gluten-free soy sauce and keeps a from-scratch kitchen. Even the broths and sauces are made in house. The kitchen also uses local food sources as much as possible, including Sierra Meat & Seafood in Reno and Sierra Gold Seafood and HK Market in Sparks. For hard-to-find Korean ingredients, she travels to Sacramento, the Bay Area, and Los Angeles. 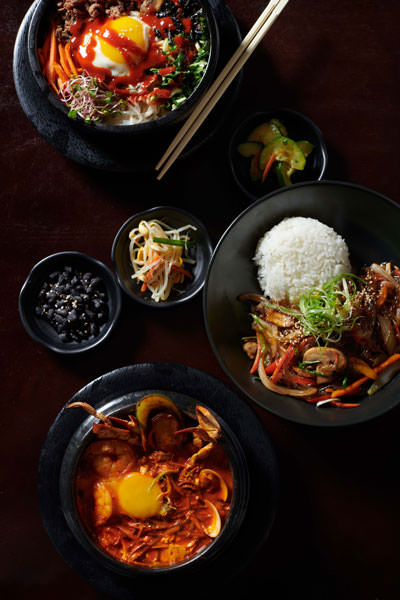 From left, Arario’s soondubu, a tofu stew that is served with or without seafood, and japchae, a stir fry of beef, sweet potato noodles, glass noodles, and vegetables

TJ modestly answers when asked about his success. He wanted to have a restaurant, he said, because of his wife, “who has great skills and passion in her cooking, which she learned from her grandmother and mother.” 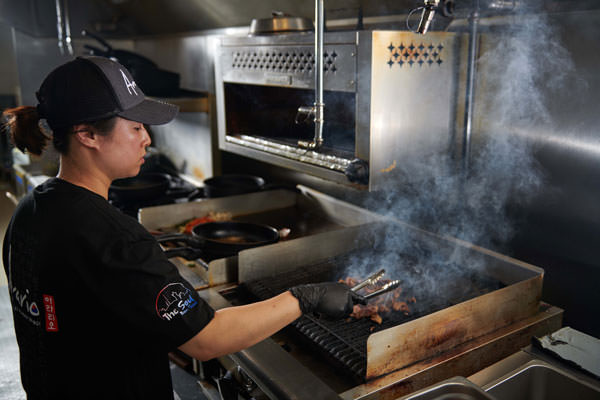 Deflecting about himself, he also gives praise to his serving staff, or “his crew,” as he calls them.

“They make our customers welcome and love to share about our food,” he says. “It’s all about my wife and my crew.”

Sandra Macias, a writer with edible Reno-Tahoe for 10 years, was curious how the name Arario came about. TJ said that he and Hani thought long and hard on a name. They didn’t want anything “simple like ‘kimchee,’ or cheesy or childish,” he says. They settled on Arario, a word in the lyrics of a famous traditional Korean folk song; the word means “great heavenly energy.” 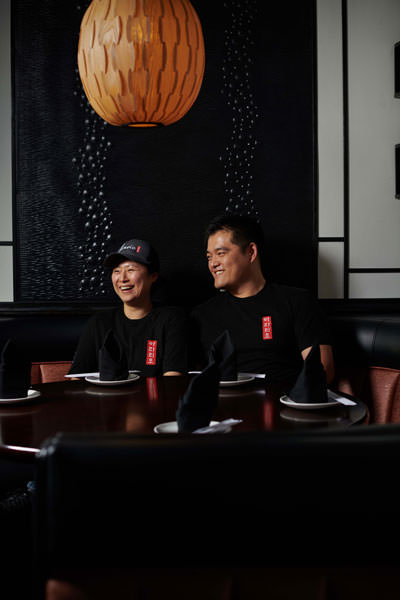 Hani and TJ Cho, owners of Arario in Midtown Reno

Open 11 a.m. – 9 p.m. Mon. – Thurs., 11 a.m. – 10 p.m. Fri. – Sat., 1 – 9 p.m. Sun. Reservations recommended on weekends. Arario is closed on the second and fourth Monday of each month to give chef Hani a day off, though this is subject to change. For updates on the schedule, visit the website. Parking is available in back of the building; enter on Center Street. Take elevator to second-floor Arario entrance. 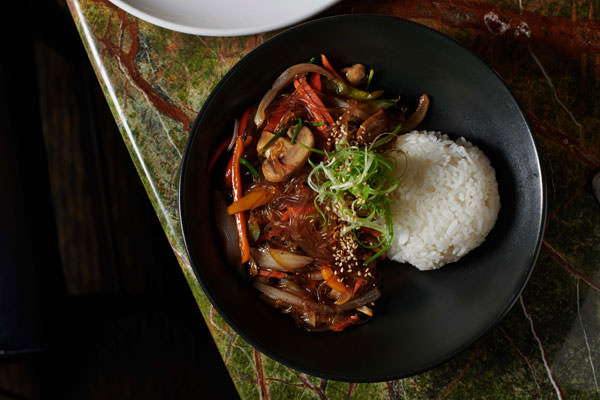 Japchae, which can be served hot or cold, is a popular dish in Korea. It is particularly tasty, TJ Cho suggests, if you mix in some gochujang (Korean hot sauce) before you dig in.

Mix all sauce ingredients in a bowl until sugar is dissolved.

In another bowl, marinate beef slices with 1 tablespoon of sauce. Set aside.

In large non-stick frying pan, heat 1 teaspoon oil over medium-high heat. Add all vegetables to pan, cook until lightly browned but still crisp. Add beef and cook until browned, about 1 to 2 minutes. Add sweet potato starch noodles and the remaining sauce. Cook and stir until sauce is reduced. Add salt and pepper, to taste.