Roy Tuscany may have a gift for inspiring those who have sustained life-altering injuries, such as himself, but when it comes to cooking — well, let’s just say he only discovered in the last year that his stove has a range of temperature settings other than “high.”

Tuscany started the nonprofit High Fives Foundation in 2009 as a way to pay it forward for the outpouring of support he received after breaking his back doing a 100-foot-high ski jump in Mammoth in 2006.

Named for the high five that he gave the surgeon who saved his life, the nonprofit was founded when Tuscany took $500 of his own money and turned it into a thriving organization that has offered support to more than 400 disabled athletes, launched numerous injury-prevention campaigns, and raised nearly $5 million in grants. High Fives operates out of a 4,000-square-foot healing center in Truckee, aiding in the recovery of athletes, as well as veterans, and supporting their re-entry into adaptive sports, such as surfing and skiing.

Tuscany grew up in Vermont, where he fondly remembers enjoying his mother’s home cooking and the blackberry jam, pies, and cobblers coming from the family’s sprawling field. After earning a degree in mechanical engineering from the University of Vermont, he headed west to pursue his dream of becoming a professional skier. Upon arriving in Truckee, he taught youth skiers at Sugar Bowl Academy until sustaining the spinal injury that would require him to re-learn how to walk and change the trajectory of his life.

Today, Tuscany lives in Reno with his wife Alana Nichols — a three-time Paralympic gold medalist and triple threat in wheelchair basketball, alpine skiing, and sprint kayaking — and their son Gunnar. At only 2 years old, Gunnar “isn’t doing much cooking yet,” Tuscany quips, but like his father, he loves nothing more than berries and a (deconstructed) burger.

“Cheeseburgers are my favorite food in the world. I can cook a mean smash burger. Don’t you dare bring me a thick, meaty burger; I won’t even touch it,” Tuscany says, pointing to the perfect meat-bread-toppings ratio of a thin, griddle-cooked burger flattened mid-cook with a spatula.

Gaining inspiration from web series The Burger Show during the pandemic, Tuscany perfected his smash burger recipe, even creating a video of the process to send out to his team at High Fives.

The key, he says, is a seasoned, hot, cast-iron pan and quality buns — particularly those from Reno’s Rounds Bakery, which he swears “makes a bun like I’ve never experienced.”

And if you don’t feel like cooking a burger at home, Tuscany has got you covered with burger recommendations.

“The best burger in America is at Al’s French Frys in Burlington, Vermont, and the second best burger is the Royce Burger [at Royce Bar] in Reno,” Tuscany adamantly insists. “And if you’re in Lake Tahoe, you’ve got to check out Inclined Burgers and Brews in Incline Village. It’s the best burger around the lake.”

Claire McArthur is a freelance writer who shares Roy Tuscany’s smash burger philosophy and condemnation of overly thick patties. She also can personally vouch that the burgers at Royce and Inclined Burgers are indeed delicious. The jury is still out on America’s best burger. 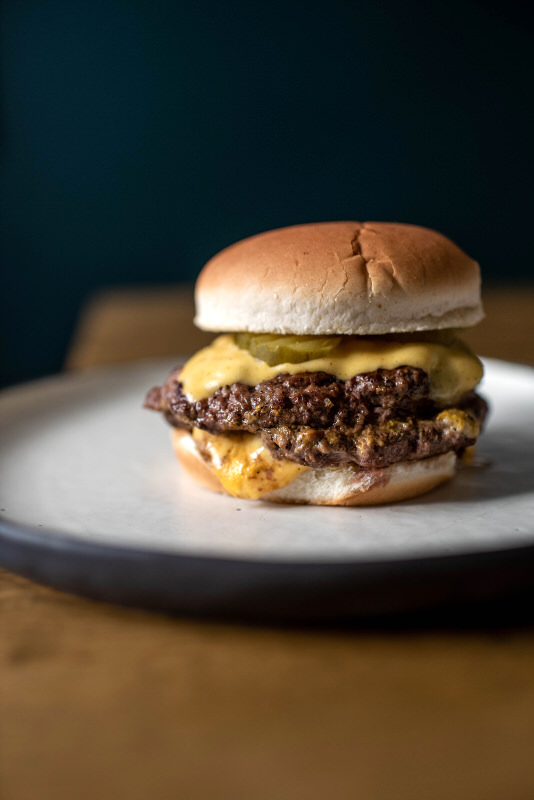 Salt and pepper, to taste

Make 8 evenly sized balls of ground beef. Heat a cast-iron pan on medium-high until very hot. Put a small handful of onions in pan and place a ground beef ball on top, then sprinkle with salt. Do the same for a second patty. Cook about 90 seconds, then smash burgers with spatula to flatten. Cook additional 30 seconds. Coat flattened burgers with mustard. Flip. Put more mustard on other side of each patty, then cook 90 more seconds. Place cheese on patties. Put more mustard on the bun before stacking with two patties and pickle slices. Repeat process 2 at a time for remaining balls of beef. Enjoy!