These elixirs offer more than just a colorful concoction.

The extraction of the essences of herbs and flowers to create elixirs has been practiced since ancient times. These sweet potions were advertised as able to cure a range of ailments, from clinical depression to coughing fits. The herbs may have been helpful, but the alcohol in them was not.

Now that considerable research has been done on beneficial herbs, the public is now increasingly interested in nonalcoholic elixirs. The medicinal benefits are even better if mixed into a beautiful drink.

“Elixirs are incredibly beneficial for your health, especially a milky oats elixir if you’re feeling stressed out,” says Mandie Koeckes, owner of Great Basin Apothecary in Fallon. “The caveat is that most elixirs are usually alcohol-based and have a sweetener added.”

Koeckes built Great Basin Apothecary as a zero-waste hub for anyone interested in obtaining and learning more about local herbs. Koeckes sells bulk herbs such as tulsi and milky oats from Fisk Farm Herbs in Fallon (see our story, “Female Farmers Get a Boost” in our Summer 2022 issue). She also sells raw honey, tinctures, teas, elixirs, and fire cider and offers classes and special events.

Koeckes makes her medicinal elixirs first as a tincture by macerating beneficial herbs with vinegar. This mixture is called oxymel and can be used in place of the more commonly used alcohol or vegetable glycerin. She then adds a sweetener such as honey or molasses.

“That gives me more control over the sweetness profile. If the elixir doesn’t taste good, then people are less likely to take it,” Koeckes says. “Especially if you are trying to get them to take it daily to experience the benefit, it needs to taste good.”

Some of Koeckes’ favorite botanicals are adaptogens such as tulsi and ashwagandha, used to treat anxiety and stress, and elderberry or any herbs that boost immunity. She also enjoys the elixirs made by Sierra Roots Wellness (sold at Great Basin Apothecary) in a glass of seltzer water.

“It’s nice to get the delivery enjoyed over a relaxing period,” Koeckes says. “It forces you to sit down and enjoy the whole experience of it.”

No force is needed to savor the nonalcoholic cocktails created by Jess Trujillo-Flynn and Patrick Flynn of Leche de Luna Apothecary. The two serve their plant-based drinks at Ferino Distillery and at various farmers’ markets in Reno.

With elegant names such as como la flor — with hibiscus, ginger, cardamom, and passion flower — and lotus love — with lemonade, lotus flower, butterfly pea flower, and lavender — imbibing these refreshments is like walking through a fragrant garden at night.

Flynn says that for part of the fun, the lotus flower mixture will change from blue to purple when added to an acidic ingredient such as lemonade.

The concept for Leche de Luna Apothecary came from the couple’s love of hiking in the Tahoe area.

“People have used plant medicine for thousands of years,” Trujillo-Flynn says. “It started out with us hiking around and finding out about the natural, healing properties of the local flora. From that, we wanted to create a space where you didn’t have to drink alcohol.”

Trujillo-Flynn worked as a bartender at Ferino Distillery and Midtown Eats. After mixing up digestives and aperitifs, she wanted to experiment with drinks without alcohol while teaching customers the benefits of plants.

“We wanted to give something like a botanical buzz,” Trujillo-Flynn says. “It’s all about being here, being present, and being willing to listen to the plant and what it has to teach you.”

Leche de Luna orders its ingredients from Natural Advantage Health Shoppe in Reno. Each small batch of herbal brew is made painstakingly by hand and then sweetened with monk fruit, a sugar substitute.

Trujillo-Flynn wants their business to represent Central American and Indigenous peoples as well as herbs that have long been overlooked by the herbalist community. She refers to her Mexican grandmother, who cultivated her own healing herbs and lived to be more than 100 years old.

“I wanted to connect back to my own roots and just teach myself to be an urban medicine woman,” Trujillo-Flynn says.

After sipping on the como la flor cocktail by Leche de Luna Apothecary, writer Christina Nellemann was intrigued by how so many exotic flavors could fit into one glass. 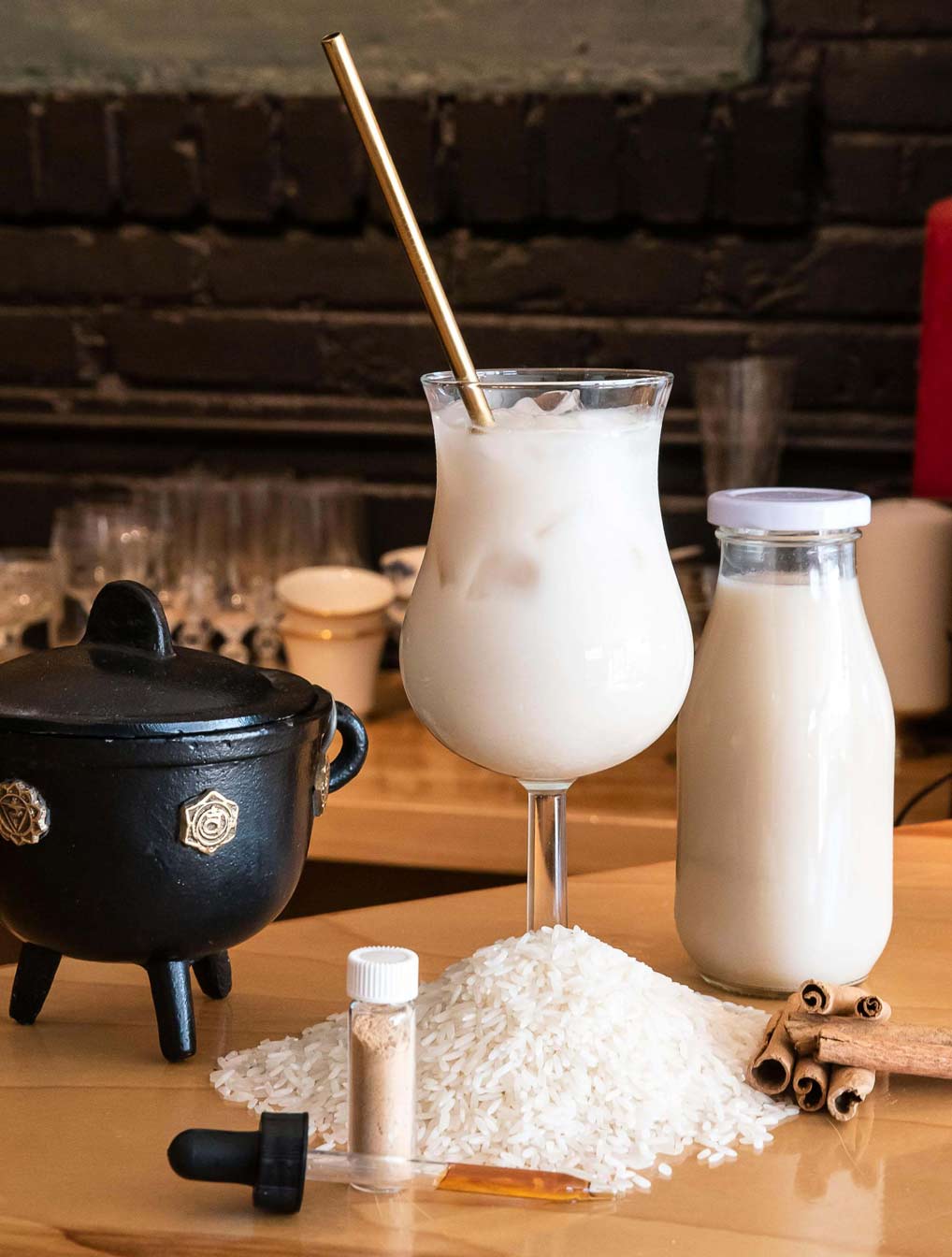 Maca has been cultivated in the Andes for more than 2,000 years as a remedy for infertility and respiratory issues.

Place rice, cinnamon sticks, sugar, and vanilla in a glass container with the boiling water and soak overnight. Blend soaked ingredients and water with milk and maca in a blender, and strain out rice with a strainer. Some rice can be added back in for texture. Serve over ice.

You can find a variety of elixirs at the following locations: