Share delectable plates at The Shore on the Truckee River.

The Renaissance Reno Downtown Hotel is like no other property in the heart of the city. Besides its prime downtown location, Sierra and river views, and having both inside and outside bocce ball courts, its restaurant, The Shore, is smack dab on the shore of the Truckee River.

Open for breakfast, lunch, and dinner, the restaurant has the feeling of a European bistro. Its modern-minimalist design connects charcoal-gray floors to black-and-white triangulated tile for a contrasting pop. Tables for two line the length of the restaurant on the river side, and comfy booths, couch-soft banquettes, and tables for four fill the rest of the room. And the riverfront patio, extended when the Renaissance took over the former Siena Hotel building, provides choice seating on a summer night: It’s best to make a reservation for a spot. 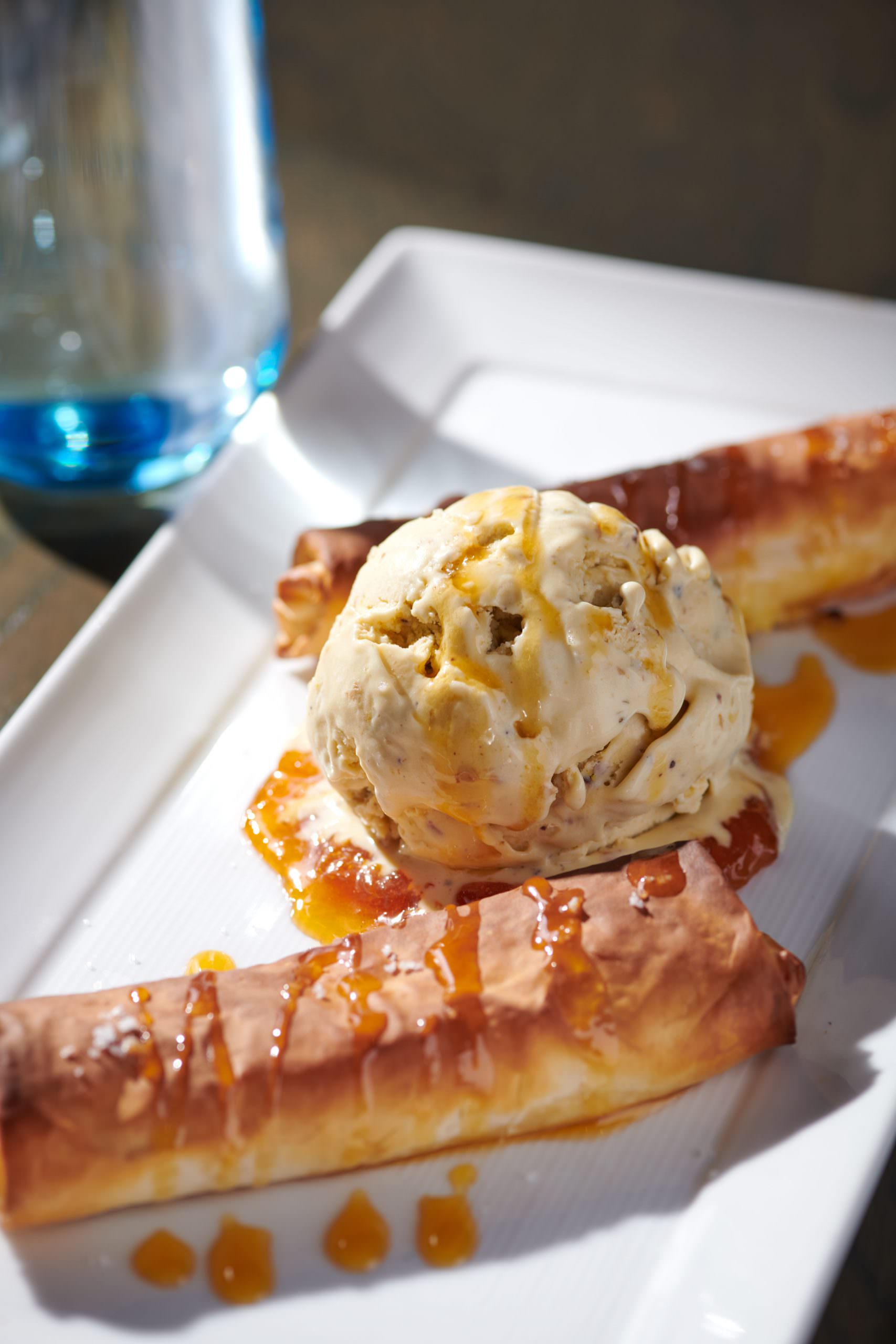 Galaktoboureko, a classic Greek dessert made with phyllo pastry filled with custard, is served with house-spun pistachio ice cream

The Shore is inspired by Greek and Mediterranean cuisines, particularly at dinner when the seasonal menu emphasizes shared small plates and lighter fare, including both salads and entrées. For executive chef Jacob Burton, this casual style of dining fits the restaurant.

“It’s the kind of food that feels comfortable and at home by the river,” Burton says.

Burton, former executive chef at Stella at the Cedar House Sport Hotel in Truckee (who left when the restaurant closed in 2015), is classically trained in French cuisine. But throughout his career, he’s embraced global cuisines.

“The culinary landscape,” he says, “is constantly expanding.” 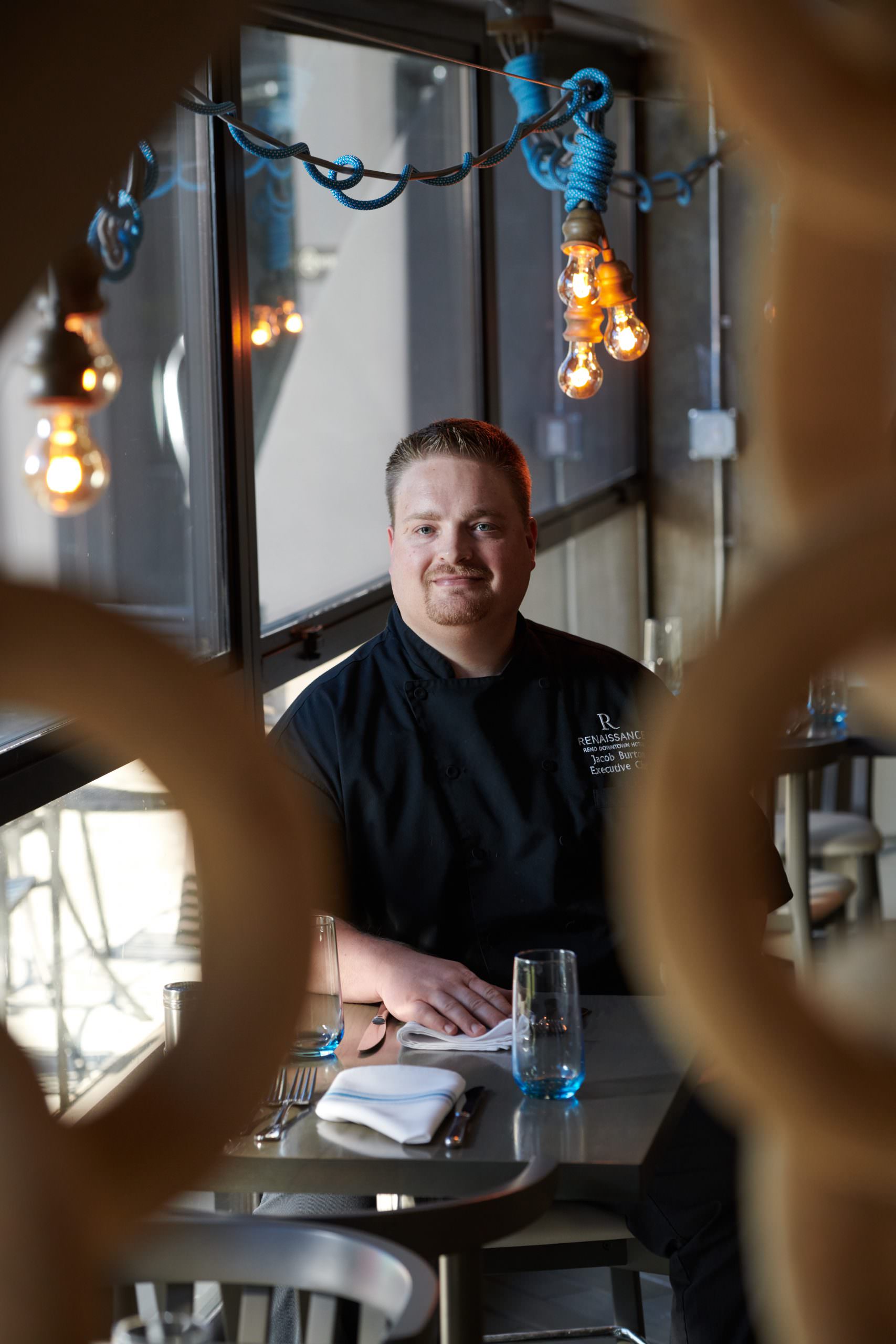 Adventures of the palate

Munshaw’s “flavor structure,” as the chef describes it, “is balanced to give maximum flavor but not overwhelm.”

An example is the beet and skordalia salad. The beets, braised in vinegar with added spices and herbs, balances nicely with the other ingredients: a smear of skordalia (a potato purée bursting with garlic) under the beets, finished with whispers of scallion, dill, and olive oil. Even a beet hater will love it.

In Greece, saganaki, a fried kasseri cheese dish, is a popular meze, or appetizer. Here, the fried cheese is feta flambéed with Metaxa. For his katsimaki, a cornmeal dish similar to polenta, Munshaw shapes it into fritters before frying and serves them with thyme honey and whipped feta. Another standout meze is blistered shishito peppers sprinkled with anchovy dust (dehydrated anchovies, ground finely in a coffee grinder). Opa! 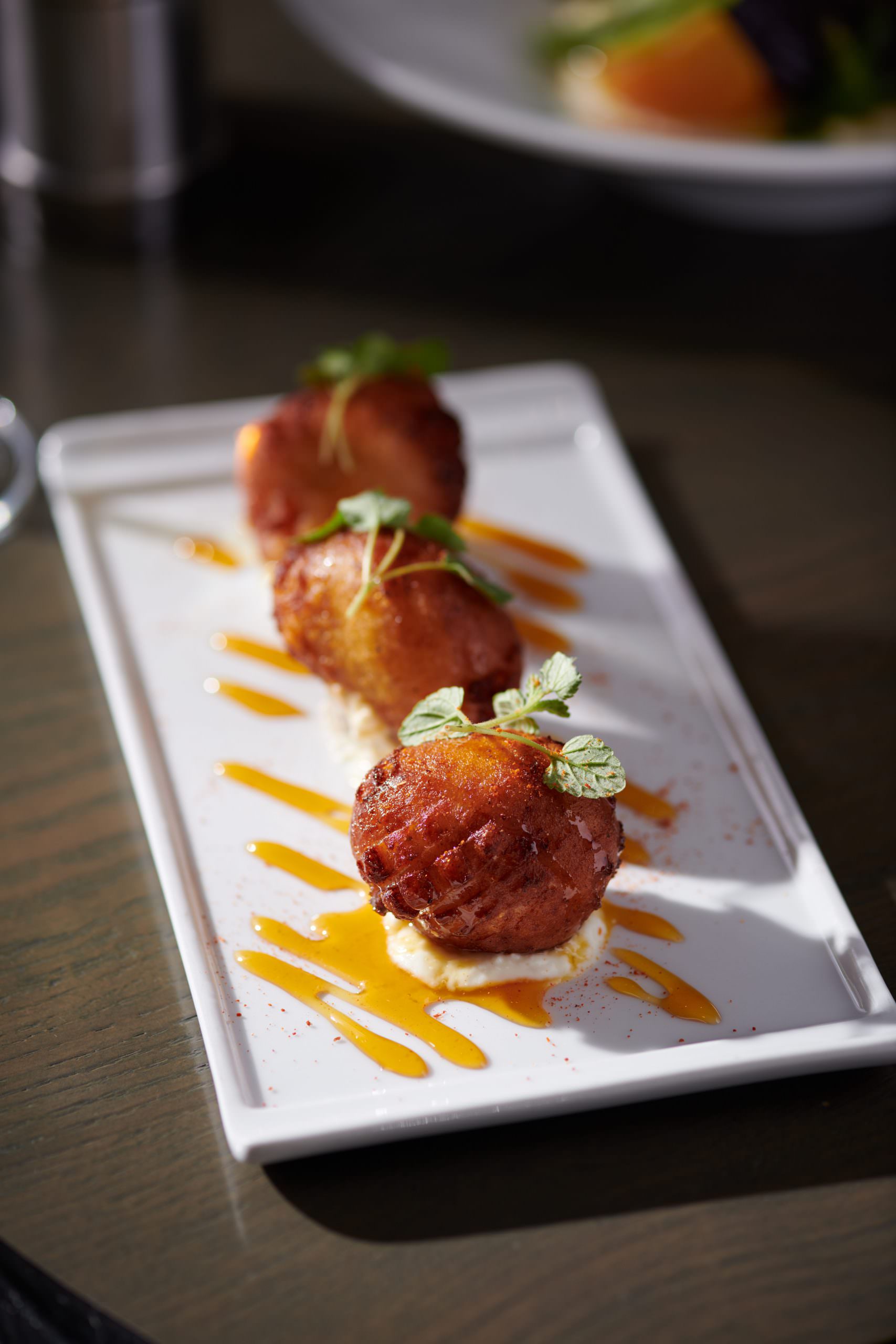 From salad dressings to long-simmered broths and demi-glazes, all are made in house. The pantry holds minimal canned goods — though they are handy for weighting the house-made pâtés into firmness. Then there are the insanely creative, made-in-house pastries from pastry chef Kevin Futamachi. The kitchen also relies on fresh, seasonal ingredients from farms in the Sacramento Delta. Distributors include Produce Plus, based in North Lake Tahoe; Twin Peaks Orchards in Newcastle, Calif.; and Reno distributors Sierra Meat & Seafood and Sierra Gold Seafood.

One last detail worth mentioning is a culinary adventure that happens on Friday and Saturday nights known as Pips Pass. Your hosts, chefs Burton and Munshaw, offer a prix-fixe tasting menu of five dishes, a dessert, and an optional wine pairing. One seating only is available for eight diners, who eat around the exhibition kitchen counter (known as the Chefs’ Counter) on Pips Pass nights.

Reservations are required for the event, and the eight-seat configuration fluctuates depending on reservations. It ranges from eight friends reserving the counter for the evening to four separate couples who don’t know each other. But there’s no problem if you are all strangers. With food, wine, and laughter, you’ll be fast friends by the end of the night. 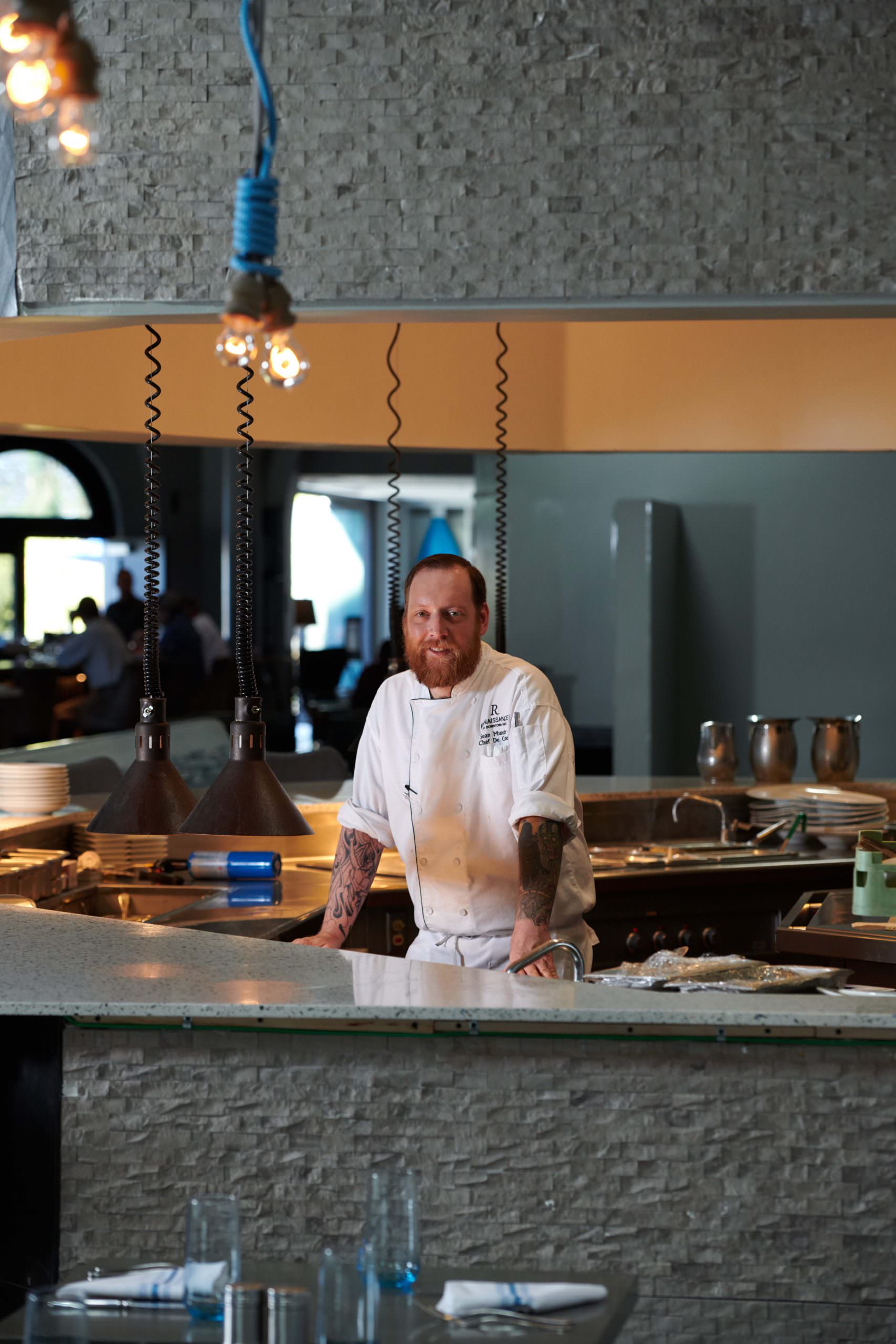 Reno food writer Sandra Macias has an affinity for dining by water. Anywhere will do: a Maui beachside, the Mediterranean, Caribbean, Lake Tahoe, or the Truckee River. For her, dining by the shore casts a sense of calm, joy, and connection over one’s place in the world. She’s happy that The Shore and its riverfront patio offer that so close to home. 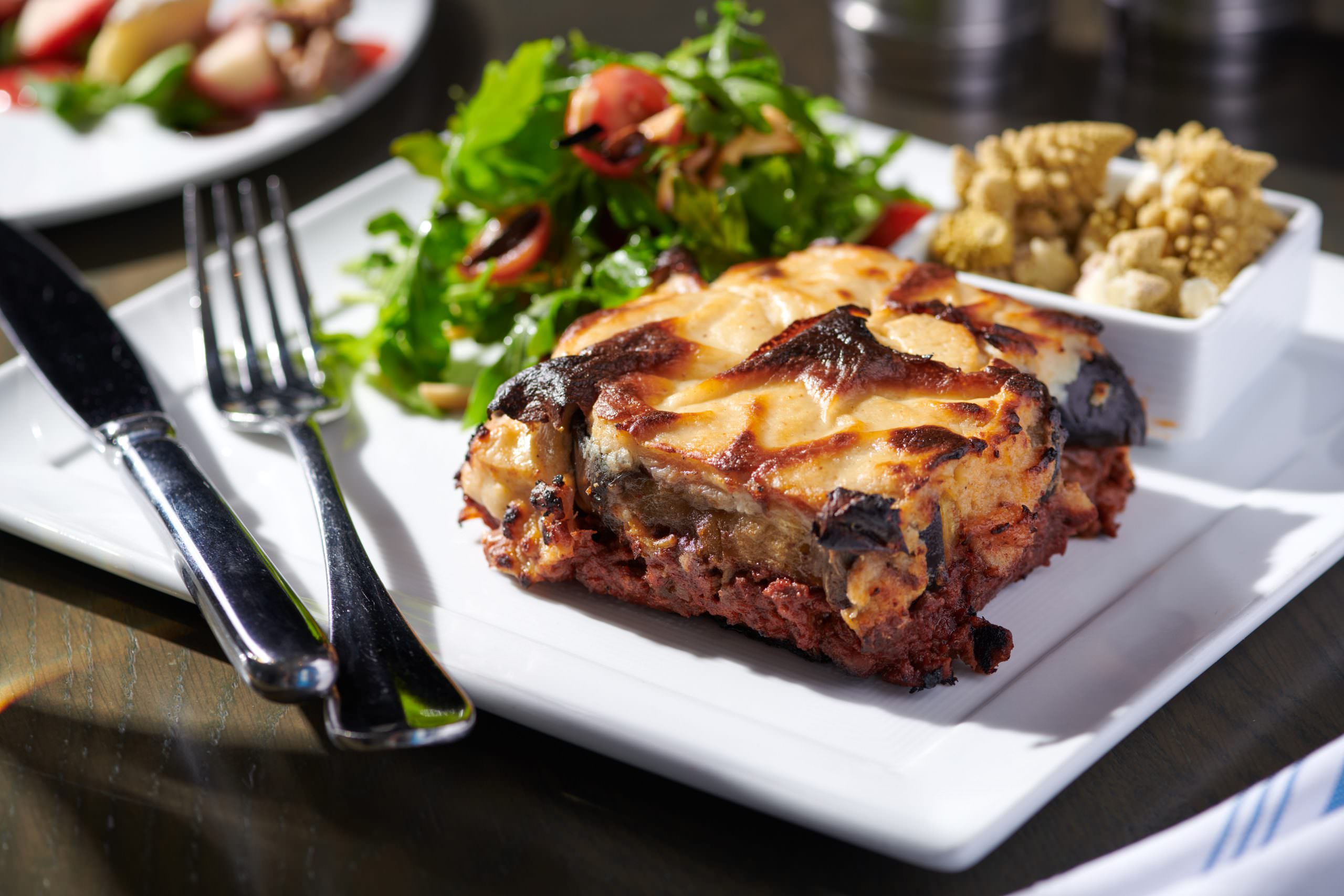 This dish is featured on The Shore’s dinner menu as an entrée.

Place prepared eggplant medallions in a bowl, and season liberally with salt. Separately, season potatoes in a bowl with salt, pepper, and garlic oil or extra-virgin olive oil. Set both aside for 1 hour.

Make béchamel. Melt butter in saucepan. Once melted, incorporate flour, stirring, until it forms a blond roux, 2 to 3 minutes. Add milk slowly, stirring constantly to avoid lumps. When sauce is smooth, turn heat to medium-high, and season with salt and pepper. Stir occasionally to avoid scorching. Thicken sauce, just below boil, for about 5 to 7 minutes. Once sauce is at desired consistency, remove from heat.

Top prepared moussaka with béchamel, making sure béchamel covers dish. Bake for 30 to 45 minutes, until dark browning occurs over top. Let rest 15 to 20 minutes. Cut into 6 squares and serve.