A Master of Tools … and the Kitchen

Randy Brown is an accountant by day, home chef by night.

Randy Brown works as a certified public accountant for AT&T, and for nearly 25 years he’s served in various leadership roles at the company. But at night, he’s analyzing a different set of numbers — those found on his favorite recipe cards.

“I learned my way around the kitchen at a young age by spending time after school with my grandmother,” Brown says.

His more recent skills often are influenced by Lara Ritchie and her team at the Nothing to It! Culinary Center in Reno.

In addition to quality ingredients sent in meal kits or picked up from the local grocery store — Brown and his wife, Natalie, eat mainly chicken and vegetarian dishes — Brown sources much of what he uses in the kitchen from his personal herb garden, which he plants each spring and which keeps his family stocked up until late fall.

“Normally, I plant chives, rosemary, sage, and several varieties of thyme and oregano,” Brown shares. “I made the mistake of planting mint one time, and it simply takes over, and you can really never get rid of it.”

Pre-pandemic, Brown was cooking about five nights per week, but since COVID-19 hit, he and Natalie have upped that to seven nights.

“The dishwasher is definitely working overtime,” he says.

To keep it manageable, the duo does most of the prep work on Sundays. They’ve sampled a variety of meal kit services and keep recipe cards from their favorites to make again or use as inspiration.

Perhaps as much as sourcing recipes, Brown has an affinity for stocking his home kitchen with high-quality tools. Favorites include Hexclad and Black Cube cookware, a good microplane, a quality mandoline, and sharp knives. He’s also recently gotten into cooking sous vide with an Anova sous vide machine (“It is the best for turning out a perfectly cooked medium-rare filet mignon,” Brown says), and he calls his air fryer “a miracle worker.” Pre-pandemic, many of these tools aided the Browns in hosting lavish dinner parties for anywhere from 10 to 40 people, often for holidays, with themed tablescapes to match.

One of Brown’s favorite recipes to make is Roasted Sweet Potato and Cauliflower Air-Fried Chimichangas with Chipotle Lime Cashew Crema, which he shares here, so you can try your hand at making it on your own.

Nora Heston Tarte is a longtime Reno resident. In addition to searching out the best food spots in Reno, her interests include wine, hiking, yoga, and travel. You can follow her local exploits and travel adventures on Instagram @Wanderlust_n_wine. 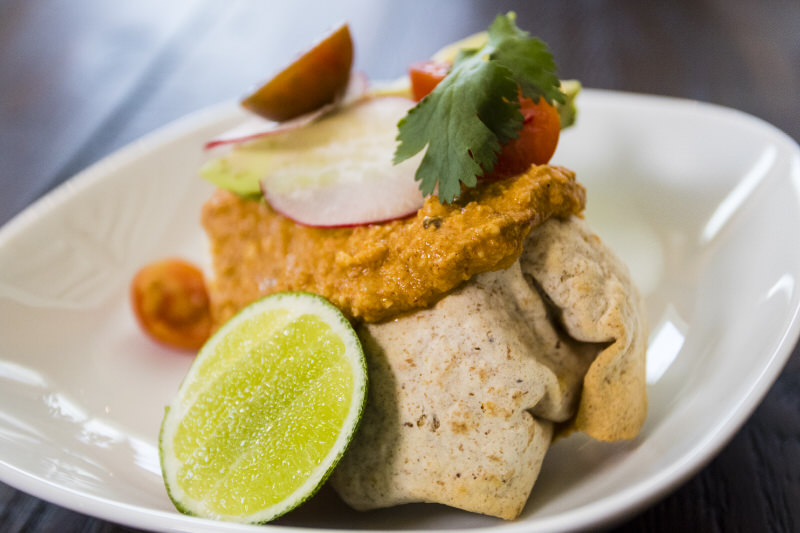 1 chipotle pepper (from can, in adobo sauce) OR 2 teaspoons adobo sauce

Preheat oven to 425 degrees F. Line a large baking sheet with foil and set aside. Place cauliflower florets and diced sweet potato in a large bowl. Drizzle with olive oil and season with chili powder, cumin, paprika, garlic powder, oregano, and salt. Squeeze lime juice over the top. Toss to combine. Transfer vegetables to baking dish in a single layer. Do not crowd. Then roast for 25 minutes, giving the baking sheet a good shake about halfway through. Add black beans to sheet pan, season with pinch of salt, and place pan back in the oven for 5 minutes. Remove pan and set aside.

Wrap ¼ of the vegetable mixture into a tortilla, forming a burrito. Preheat air fryer to 400 degrees F. Spray all sides of the chimichanga with cooking spray. Place in air fryer, seam-side down, and cook 7 to 8 minutes, flipping halfway through. Put chimichanga on a plate, spoon ¼ of Chipotle Lime Cashew Crema over chimichanga, then garnish with tomatoes, sliced avocado, cilantro leaves, and a lime wedge.