Meet The Rancher: The Last Buckaroo

Set amid a slice of Nevada where the hills look like a calico cat — festooned with patches of pink, silver, brown, and charcoal gray — is Rawhide Ranch. Out in Mineral County, near Luning, Nev., with traces of mining’s past and present, tall antennas watch over wide swaths of land like sentinels. David Holmgren, owner and wrangler at Rawhide, maintains water rights on 528,000 federally managed acres to run what he says is not a ranch but a cow outfit.

Holmgren and his outfit are anything but ordinary.

Holmgren looks and sounds as if he just stepped out of a 1950s Western film. The true buckaroo adheres to a Spanish riding style and manner of dress: spade bit, wide-brimmed hat, spurs.

Home on the range

Holmgren grew up on a ranch in Montana. When his family decided to halt the operation, the fourth-generation rancher set off looking for a new spot of dirt on which to build a life. He first landed near Battle Mountain, Nev., in 1986 on a buckaroo ranch.

“They told me I was the best they ever had,” he says, “and they are the biggest outfit.”

He moved to this land, two and a half hours from Reno, 17 years ago and began fixing up the house and corrals. Then he looked for a herd to call his own. He decided to run a 100 percent native, North American longhorn cattle operation. Why longhorn?

In addition to its long history, Holmgren chose the breed because of its heartiness.

“I’m able to bring them to this natural setting and not intervene in any way,” he says. “They don’t get any shots or hay. I let nature rule. I just cull them. It’s the ultimate situation. And this clean desert can’t be duplicated.” 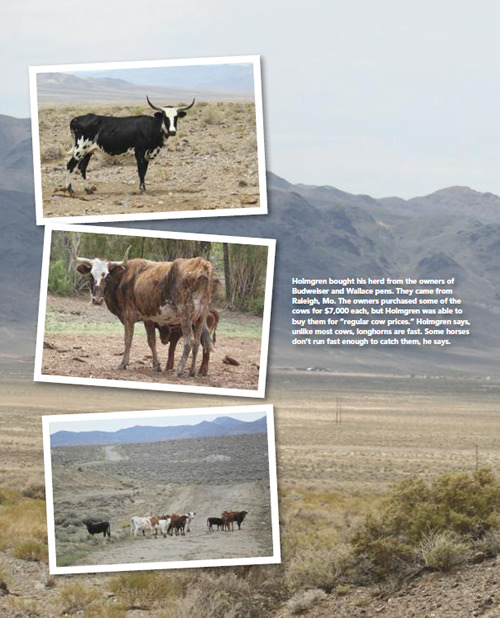 Holmgren is a big proponent of naturally raised cattle. His cows never see a feedlot.

Out on a tour of the land, near Walker Lake and Yerington (with 9,000-foot Pilot Peak in the distance), we spot families of multicolored cows with their distinctive long horns. Along the dirt road, we see washes filled with sagebrush and a hint of wildlife here and there. Then we come across an old wooden corral built around a bountiful spring (one of about 80 in the area), surrounded by mature Russian olive trees, grass, and tall bushes. Some of his cows are enjoying the shade.

As thunderheads sweep in, bringing a cool breeze to the humid air, Holmgren talks about his beef.

“The meat tastes like the land, sagebrush, and hundreds of other plants,” he says. “It’s not gamey at all and it’s very moist, with an earthy essence to it.”

Charlie Abowd, chef/owner of Adele’s Restaurant and Lounge, in Carson City and a Rawhide client, says Holmgren’s beef has terroir, a term usually associated with wine.

Holmgren says his meat also is consistent, unlike some grass-fed meat, which sometimes can be fatty and sometimes lean. One beef customer, a Beverly Hills doctor, says Holmgren raises some of the best protein on the planet.

“The keystone to this arch out here is not to feed them,” he says. “They just eat the desert.”

Holmgren lives far from town, on a vast stretch of what many call nothingness. But standing there, with shadows rolling over the mountains and light shining down in streams through the clouds, one can meditate in the quiet surrounds.

“Most people don’t understand me living this far from town,” he says. “But I live on one of the most beautiful and exotic lands anywhere.”

This is his home. One can see that the healthily plump cattle, foraging and propagating naturally, enjoy living there, too.

Amanda Burden is editor and publisher of edible Reno-Tahoe. She was captivated by her tour of Rawhide Ranch and believes the only way to raise cattle is naturally.

Half and whole cows are available, and the meat can be cut and wrapped to your specifications. It can be delivered to 500 miles of the ranch, or pick-up and shipment can be arranged. To purchase Rawhide Ranch meat, visit http://www.Rawhidelonghornmeat.com or email Rawhide_ranch@yahoo.com or call 775-455-5671.