Celebrate the season with local cakes, chocolates, and cookies.
And meet the people behind the confections.

If there’s no chocolate in heaven, I’m not going. ~ Anonymous

There is one sure-fire way to put a smile on a person’s face — hand her something sweet. We love the taste of sugar, whether in the form of a chocolate truffle, vanilla cupcake, or raspberry-filled croissant.

We are fortunate to have an abundance of talented chocolatiers, bakers, and pastry chefs in the Reno-Tahoe area who tempt our taste buds with sweet delights. And, without exception, the reason they work long hours cooking up sugary concoctions is for one reason: to see their customers’ eyes light up with joy as they savor mouthfuls of sweet happiness. 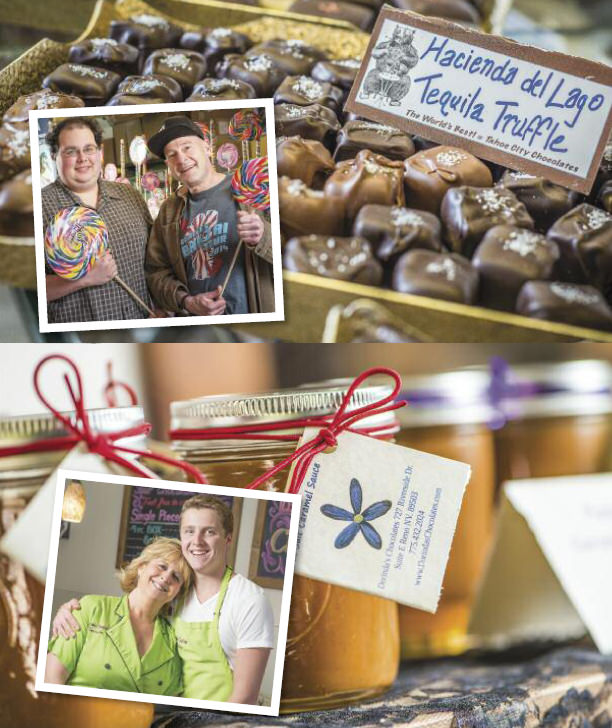 Walk into Tahoe City Chocolates and you will immediately find yourself with a sample of a delectable treat in your hand. Owner Mike “AK” Akay, who has owned the 33-year-old store for six years, loves to ply customers with pieces of his homemade delights from around the world. His store carries more than 60 types of chocolates and candies in the display case alone, not to mention 500 products from every state and some of the world’s top-selling candy bars.

Akay grew up in Burlingame, Calif., with the enticing smells of the Guittard Chocolate Co. constantly wafting to his nose, so it’s no surprise that he uses chocolate from Guittard — at 146 years old, America’s oldest family-owned chocolate factory — for all of his truffles and other creations. Akay insists on using bittersweet chocolate instead of semi-sweet chocolate because he believes it is of a higher quality and taste.

“We are probably the only candy store in the country that has no semi-sweet chocolate for production,” Akay says.

Akay, who is a self-taught chocolatier, prides himself on making “some of the most unusual candies on the planet,” he says.

These include chocolate-covered organic cherry tomatoes with Celtic sea salt, the AHA! (almonds, habañero, and apricots covered in dark chocolate), the Hacienda del Lago Tequila Truffle (made with the neighboring restaurant’s house tequila), and the Brooksberry Movie Bar — a mouth-watering combination of caramel and popcorn submerged in dark chocolate. He also makes 12 different types of truffles, all using organic eggs from the local farmers’ market, in such flavors as grapefruit habañero, cinnamon sriracha, and chai.

“I just like being the king of candy and seeing the satisfaction people get,” Akay says about choosing to work in the sweets business. “That’s it.” 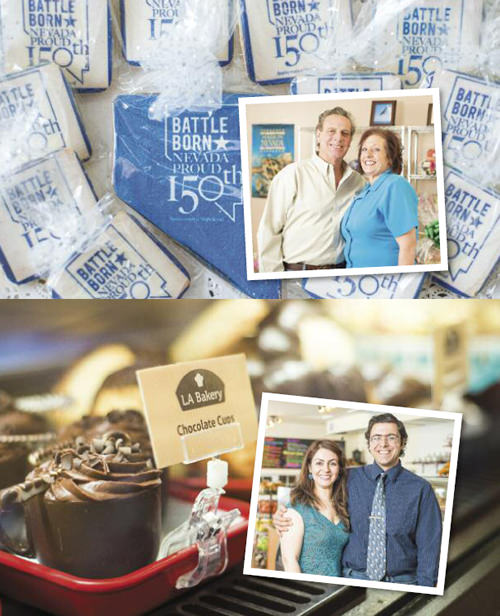 Dorinda Vance had been making chocolate since she was 12 years old, but received her formal training in chocolate making through an online course with the Ecole Chocolat, as well as attending the Barry Callebaut Chocolate Academy in Chicago. A mother to four boys in Truckee, Calif., she used that training to make her chocolate-covered cherries and sea-salt caramels, then began selling them out of the back of her car.

But what kicked her career into high gear may have been an accident. In 2010, Vance was asked to be part of the Chocolate, Wine & Roses Festival, in Incline Village.

“I think they mixed me up with Dorado Confections,” Vance says. “I showed up thinking, ‘Oh, I should not be here.'”

Her sea-salt caramels ended up winning the award for Most Original Taste, and confirmed for Vance that she had talent. At the next two years’ festivals, she captured the People’s Choice Award.

In 2010, Vance opened Dorinda’s Chocolates in Truckee, but within two years she had outgrown the small kitchen. She closed the Truckee store and reopened in a 1,500-square-foot space in downtown Reno.

Vance needs all the space she can get for her 75 products, which are almost all handmade and hand dipped. These include 30 types of truffles; sauces such as hazelnut and pumpkin caramel; cocoa; and ice-cream sandwiches (of which she sold 800 in one month this past summer). She uses about 90 pounds of high-end Valrhona French Chocolate (a baking chocolate) crafting the pieces each week.

“No other chocolatier in this area uses this chocolate, and you can taste the difference,” Vance says.

She must be doing something right because this summer she opened a second store in the Village at Squaw Valley and also can be found serving coffee in the Tram building this winter.

“I really love seeing the looks on people’s faces and bringing their joy out,” she says.

You can even sign up for Dorinda’s Chocolate of the Month Club, which now is online. You can sign up for a three-, six-, or 12-month subscription for yourself or a loved one, including her award-winning sea salt caramels. Prices start at $46 per month, including shipping.

Lynn Falcone needed a new career after her family’s electronics business in North Carolina went under in the early 1990s. She always had made chocolate as a hobby and for holiday gifts, and when she discovered a piece of equipment that made edible photo toppers for cakes, she became a beta tester for the company. Falcone used the equipment to bedeck chocolates, cookies, crackers, and even hot dogs with edible images.

When she noticed that people didn’t like the feel of the edible paper dissolving in their mouths, she developed her own glaze. In 1997, she and her boyfriend, Harvey Jasny, started an online business and established contracts with Kodak and Photo TLC to make cookies and other treats with edible images.

In 1999, the pair moved to South Lake Tahoe after falling in love with the area during a visit. Six years later, they moved to Gardnerville to buy a house. In 2012, after Kodak filed for bankruptcy and Photo TLC went out of business, the pair decided to get out of Internet sales and open a brick-and-mortar chocolate store for retail and wholesale customers. The Chocolate Shoppe quickly took off, and the couple’s inventory grew from 15 to more than 100 items.

Falcone and Jasny still emblazon food with edible photos. They even were the official confectioner for the yearlong celebration of the Silver State’s 150th anniversary, reproducing the logo on cookies, chocolates, and lollipops. But, now, the majority of their business is chocolate. They make 80 varieties of chocolate (such as cranberry and pistachio dark chocolate bark) and 10 flavors of truffles, including Chambord, which is made with a black raspberry liqueur from Churchill Vineyards in Fallon, and the popular Bordeaux, made with a mocha buttercream center enrobed in chocolate and dark chocolate liqueur sprinkles.

“This is so much more fun,” Falcone says of the work she is doing now. “I was behind a computer trying to keep us on search engines, and now I can see people’s reactions when they get a free sample and say, ‘Oh, my God, this is the best thing I’ve ever eaten.'”

Like Falcone, Ali Arbabha was in search of a new profession after losing his civil engineer job in Reno in recession-plagued 2009. His wife, Leila Tavakoli, who has a degree in applied chemistry, was teaching cooking classes at local hotels and coffee shops.

After looking for work with no success and living off of unemployment, the pair, who originally are from the Middle East, decided to capitalize on Tavakoli’s cooking experience and start a wholesale business making Mediterranean and Middle-Eastern pastries. In the span of two years, their business grew quickly, and the couple soon had 40 customers in Northern California. But the growth was too fast too soon.

“It was overwhelming. We couldn’t catch up,” Arbabha says.

He attributed the wholesale business’ rapid growth to quality products.

“We had something no one else had — we make everything homemade,” he says.

Arbabha decided to focus only on the Reno-Carson area, and now sells his cakes, quiches, cookies, muffins, and baklava to the Atlantis Casino Resort in Reno; Whole Foods Market in Reno; 16 coffee shops in Reno, Carson City, and South Lake Tahoe; and at the Carson City Farmers’ Market in summertime. After customers asked the couple to open their own store, in 2012, the two launched L.A. Bakery (named after their first initials) in Carson City, where they live. The store serves as a bakery, a coffee shop serving lunch daily (quiches, sandwiches, salads, and soups), and a catering business. At L.A. Bakery customers find about 60 different types of pastries, including some that are gluten free, as well as cupcakes and wedding cakes. Arbabha’s secret, he says, is that they don’t over-bake.

“We never have anything left over; we always sell out,” he says. “If we are running out, we bake more. We bake as we go.”

Some of their most popular items include carrot cake (they sell 70 pieces of the 2-pound slices each week), which is made with homemade buttercream filling, and cheesecake, which comes in flavors such as pineapple mango, pumpkin, and white chocolate raspberry.

“This is not store-bought stuff,” Arbabha says.

Customers already are asking Arbabha to open another store, which he is considering doing, possibly in Minden or Reno. 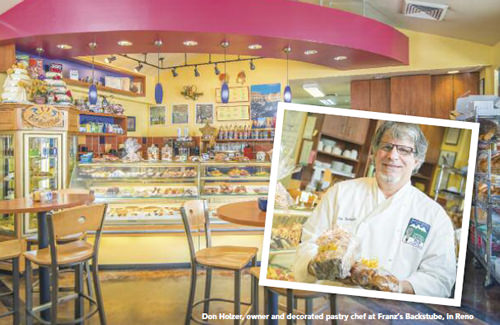 Don Holzer has a long and storied career in the pastry business. Trained as a pastry chef, Holzer got his start at the age of 19 at the MGM Grand Hotel in Reno, where he apprenticed under Franz Hauser. Holzer went on to work at Reno’s famed Mapes Hotel, as well as all over the country — in Las Vegas, Kansas City, Chicago, Phoenix, and Washington, D.C. Hauser opened Franz’s Backstube (Austrian for “bakery”) in west Reno 13 years ago, and in 2011, after having worked with Hauser for 35 years, Holzer bought the bakery from him.

Everything at Franz’s Backstube is homemade. Holzer and his team make 14 types of cookies; 10 different French- and American-style pastries made with imported European chocolate and fruit purées, including croissants and puff doughs; and 10 types of desserts, such as crème puffs, éclairs, and napoleons. Franz’s is known for its cakes, including wedding cakes and the famous princess cake, which is a white cake made with cherry liqueur sauce and raspberry marmalade. Franz’s also serves sandwiches and salads for lunch, and has made a name for itself with its goulash, a Hungarian stew of meat and vegetables seasoned with paprika and other spices, and house-made granola.

Today, Holzer, 57, is considered one of the top pastry chefs in the U.S. He has worked on three presidential inauguration parties, and Bon Appétit named him one of the 30 most influential pastry chefs in America. In 2013, he earned the designation of Pastry Chef of the Year from the American Culinary Federation’s High Sierra Chefs Association. And he has appeared on the cover of Pastry Art & Design Magazine, not to mention 20 appearances on the Food Network, including once for the $50,000 Pastry Challenge. Although Holzer never won, he said it was an honor to be among such elite pastry chefs.

“Just to be in their company is amazing,” he says.

Melissa Siig is a writer based in Tahoe City, Calif. If she didn’t have a piece of dark chocolate at least once a day, she’s not sure life would be worth living.

Mix ingredients thoroughly together, drop spoonfuls on a baking sheet, and bake for 10 to 12 minutes. Cool and enjoy!

Once cooled, pour mixture into individual ramekins. Pour water into bottom of roasting pan and place ramekin dishes on roasting pan; water should only come about a half inch up sides of ramekins. Put pan in oven and bake ramekins in water bath for 25 minutes. Cool for 1 hour.

Sprinkle lightly with granulated sugar and use kitchen blowtorch to caramelize it. Hold flame just above sugar and keep moving it around surface until caramelized.

Serve when brȗlée is firm, or within an hour or two.