WARNING! Breakfast at Fire Sign Café is not to be undertaken lightly. This iconic Tahoe restaurant is no quick in-and-out diner. Fire Sign is so popular, wait times can be considerable. As manager Amy Herman says, eating there is “an experience.”

What makes locals and tourists alike willing to wait? It’s the creamy, lemony homemade hollandaise and perfectly cooked eggs in the eggs benedict. It’s the freshly cooked sweet potato muffins and made-from-scratch Bloody Marys. It’s because almost any order can be adapted for vegan or vegetarian tastes, and because so many of the baked goods are prepared either in house or at local bakeries. It’s the cozy rooms — the place used to be a home — with pine paneling and natural stone, and the flower-filled planters lining the tree-shaded deck.

Plus, there’s the fact that Amy and her co-manager and husband, Mark Herman, have made waiting so pleasant. When Fire Sign gets really busy, they open the Annex, a renovated cabin a few steps away where customers can relax with coffee drinks and games and puzzles. 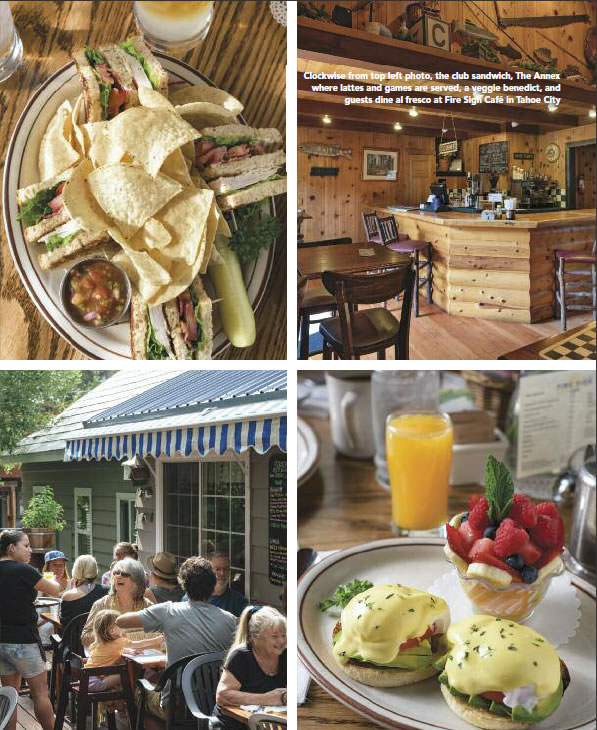 The Hermans took over management of Fire Sign from longtime owners Bob and Christi Young, who also happen to be Amy’s parents. It was Bob who created the menu and developed the emphasis on fresh ingredients and homemade food. The Youngs acquired the café in the early 1980s, when the menu was mostly vegetarian. Bob not only applied his own taste, but also incorporated suggestions from staff and customers to create a wide-ranging menu.

“It was just last year they added the Rubicon Scramble,” Bob says. “They sell thousands of them now.”

The Youngs did more than tinker with the menu. They put the baby in her high chair at the end of the line and went to work.

“My dad can flip eggs with the best of them,” Amy says proudly.

Bob imbued Fire Sign with freshness, quality, and attention to detail. For example, he decided that canned beans weren’t good enough, and started simmering his own. That led to a multitude of homemade items, from savory chorizo to vibrant pesto.

After years of running the restaurant, the Youngs swapped the crowded shores of Lake Tahoe for the wide-open spaces of Montana. Newlyweds Amy and Mark had business training and practical experience, so the torch passed to them.

The couple has made a few changes in the two years since they took over. They painted the front door an eye-catching red to replace the gray it had been. They revamped the Annex, with lattes and puzzles and chairs on the front porch. They also put Fire Sign on Twitter and Facebook as well as updated the website. But the fundamentals that made Fire Sign a success remain, including the emphasis on customers.

“The answer is never no,” Amy says.

They both are appreciative of their employees, especially kitchen manager Gumaro Martinez, who was trained by Bob and has been at Fire Sign more than 20 years.

“We have an awesome kitchen crew; they keep their cool even with a row of tickets,” Mark says. “With Gumaro, the more the tickets stack up, the faster he works.”

Their service crew is just as efficient, as well as friendly, fast, and knowledgeable. It’s easy to see their pride in the restaurant and the food they serve.

It’s this combination of food, service, and charm that lures customers such as Phil and Anita Calihan, who wait happily for a table today, and which takes them to Fire Sign nearly every day during the months they summer in Tahoe.

As Anita says, “There’s nothing like this in Phoenix.”

Freelance writer Kay Fahey learned about food while working in her family’s restaurant. She has been writing about food and restaurants for longer than she cares to admit.

½ cup fresh cilantro, chopped (save remainder of bunch for garnish)

Sauté all items above in a stockpot (preferably stainless steel) with vegetable oil until onions are translucent.

Bring to low boil, then reduce heat and let simmer for five minutes.

Return to low boil, then turn down heat and let soup simmer for additional 20 minutes.

This is a great recipe for leftover sweet potatoes, or you can plan ahead and bake a large sweet potato the day before making this recipe. Peel the potato after it’s cool.

Add wet ingredients to dry mixture and then fold in sweet potatoes. If mixture seems too dry, you may need to add a little more milk. Fill greased muffin tins just more than ¾ full and sprinkle tops of each with topping mix. Bake 27 minutes, or until inserted toothpick comes out clean.