Truckee residents enjoy filling bellies, one sandwich at a time.

Five years ago, Eric Barton and Tom Marrin, then work acquaintances, joined forces to parlay their hotel/restaurant management degrees into two small businesses: a delicatessen and a catering company. Equally, or perhaps more, critical to their success as owners of Truckee’s Full Belly Deli and Moody’s Catering is their love of food.

That in no way limits their menu offerings, though, as the two are gastronomically adventurous. Marrin claims from experience an animal’s brain is its tastiest part, and he only cites bologna and beef liver as being edibles he avoids. Barton, a picky eater in his youth, has evolved, with Marrin’s influence, to where he’ll try anything (he even likes pigs’ ears), especially if Marrin prepares it, he says. Barton couldn’t name any foods he fervently dislikes.

The daily special at Full Belly Deli always is new, and is a dish Marrin has never prepared. (He primarily cooks, while Barton oversees the front-of-the-house operations and event coordination.) Marrin thrives on infusing his dishes with creativity for edgy-yet-tasty concoctions, such as the Nacho Pollo Loco, a Doritos-encrusted chicken sandwich. The deli’s signature sandwich and bestseller is the Dirka Dirka — corned beef with pickles, yellow mustard, Swiss cheese, and jalapeño cole slaw.

“We both have the passion and fire that push the limits of the deli,” Marrin says.

Marrin takes many culinary cues from Southwest and Mexican cuisine and flavors, his favorites — you’ll always find tortillas (and beer) in his fridge, he says. When he infrequently cooks for himself, it’s most likely Mexican fare. He’s always game to cook outside of work for a special occasion, too.

Barton enjoys spicy food and all kinds of meat. When he cooks, which is rarely because work keeps him so busy, it’s always barbecue. The array of condiments in his fridge speaks to his experimentation when he has the time. 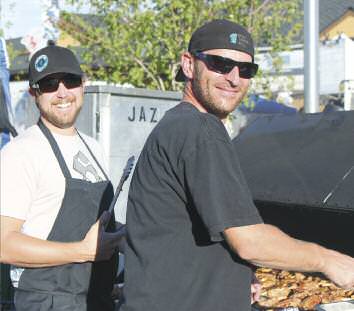 The two restaurateurs like to eat at Stella and Moody’s Bistro, both in Truckee, and at a small, Mexican butcher shop/deli in Sparks called Carniceria Samber, where they say the food is authentic and excellent. On vacations, which they often take together, they’ll eat at all different types of restaurants in the area. Even when they camp, their food is gourmet all the way (think leg of lamb).

Full Belly Deli specializes in house-made soups (roasted corn and poblano soup, for example) and house-baked bread (such as jalapeño cheddar). The owners use local, seasonal ingredients whenever possible (produce from farmers’ markets and Sierra Valley Farms in Beckwourth, Calif.) in addition to grass-fed beef and farm-raised animals.

“It makes my job easier because it tastes so good and fresh,” Marrin says. “The flavors speak for themselves.”

Doresa Banning is a freelance writer and editor who makes Reno her home.

Slice French roll into 2 pieces. Layer from bottom to top with bacon, tomato, arugula, and goat cheese. Spread 3 ounces of fig jam on the top piece of bread. Slice in half.

Soak figs in lemon juice and brandy for ½ hour in medium saucepan. Add sugar and simmer for 45 minutes. Do not burn! Add mixture to food processor and blend until smooth. Serve.