Those three simple words, prompted by autumn’s bounty of apples literally falling off the backyard trees, were just the beginning of a fun, interesting, and delicious educational experience to share with the child by my side.

My 10-year-old grandson, Colton, was more than game for the adventure. After all, it involved ladders, tree climbing, plunging elbow-deep into gooey apple pieces, and getting something sweet to eat at the end. What’s a young person not to like? And so the fun began — no surprise there. But what ensued was far more than either of us expected.

Once the apples were gathered, I brought out the star of the show: the all-in-one apple peeler, corer, slicer. Turns out that simple, inexpensive contraption that to an adult is simply a great time saver also is a mind-blowing source of curiosity, wonder, and amazement to a child.

The machine is easy and safe for a child to use in a supervised setting and makes quick work of prepping the apples. Just load an apple on the prongs, turn the crank, and in less than a minute, with minimal effort, you have a perfectly peeled, cored, and sliced apple. But more than that, it’s actually fun to do and amazing to watch, and kids get a kick out of seeing the long, spiraling apple slice that results — a kind of apple Slinky! (Of course, he couldn’t resist playing with them!) 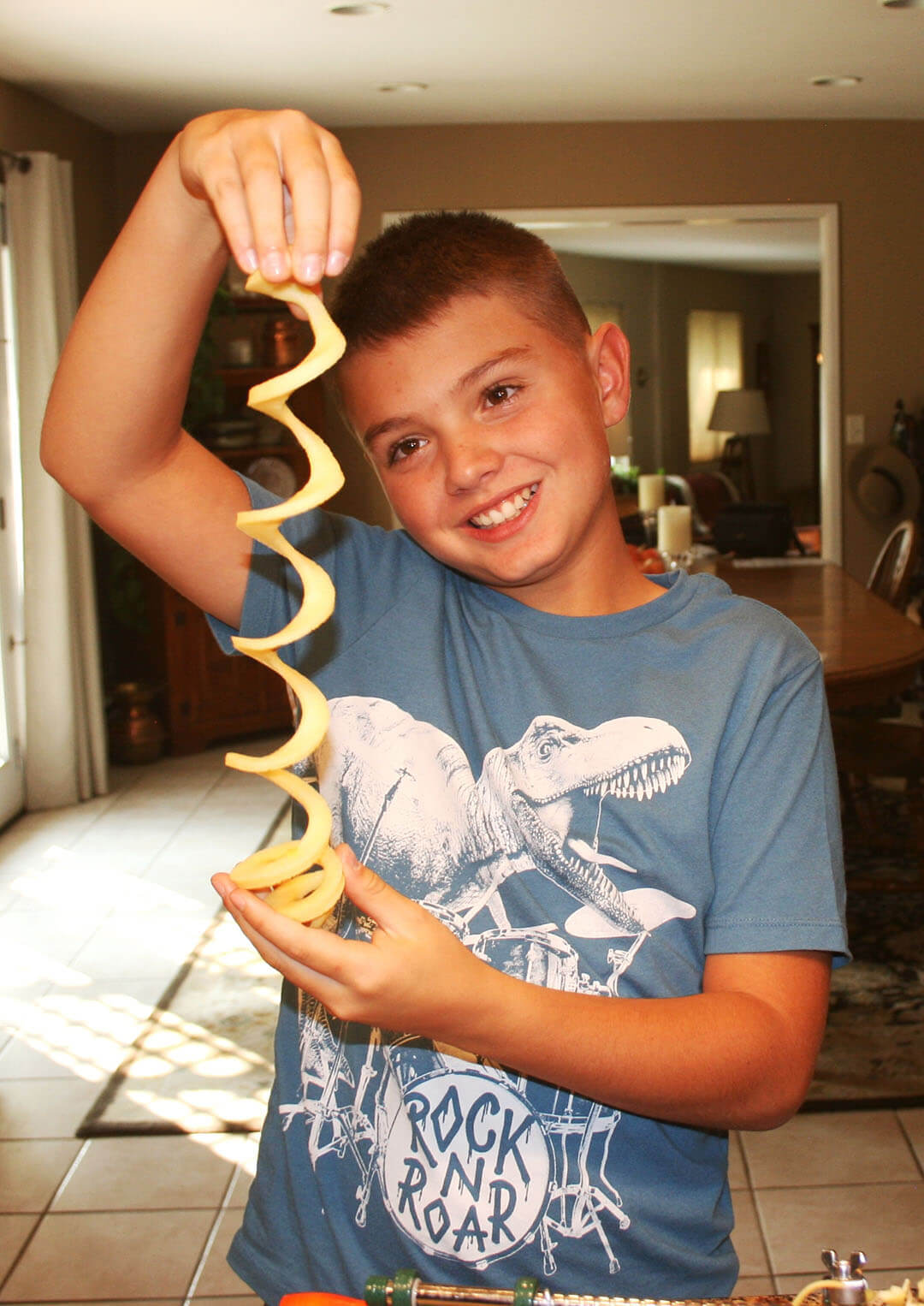 When we finished, we walked the apple scraps out to the compost heap and dumped them on the pile. We discussed how this organic “garbage” actually would turn into soil so rich it’s called black gold and would be the source to grow and nourish our fruits and vegetables in next year’s garden. He thought that was pretty cool — almost as cool as the worms, especially when he learned they were the vital magicians in this conversion process.

With apples now ready for the next step, I pulled out a very simple, basic applesauce recipe that I’ve used with my own children since they were small (see below). We began reading the recipe.

“What’s a ‘t-s-p’?” he asked, which resulted in a lesson on common recipe abbreviations—a whole new language for our novice cook.

Further discussion involved the importance of carefully reading and following directions, including amounts, order, and timing. When you think about it, these actually are important life skills benefitting more than just cooking.

The real challenge came when we had to haul out the big guns — our math skills! The recipe is written to turn one quart of apples into applesauce. Once we’d cut, washed, and measured our apple booty, we had five quarts! I explained how we now had to adjust the recipe by multiplying everything by five. (Blank stare.) After some further explanation, some paper and pencil calculations, and a few diagrams to help with understanding the concept of adding/multiplying fractions, we were good to go — and a lot more respectful about the value of using math in our everyday life.

So we measured and mixed and stirred and cooked, and watched our crisp apples transform into soft and yummy morsels and, eventually, applesauce. It was an enjoyable afternoon project that taught him a myriad of practical life skills while we had fun, made memories, and enjoyed delicious, warm applesauce at the end of the day.

I called it cooking. He called it his science experiment. Turns out we were both right. 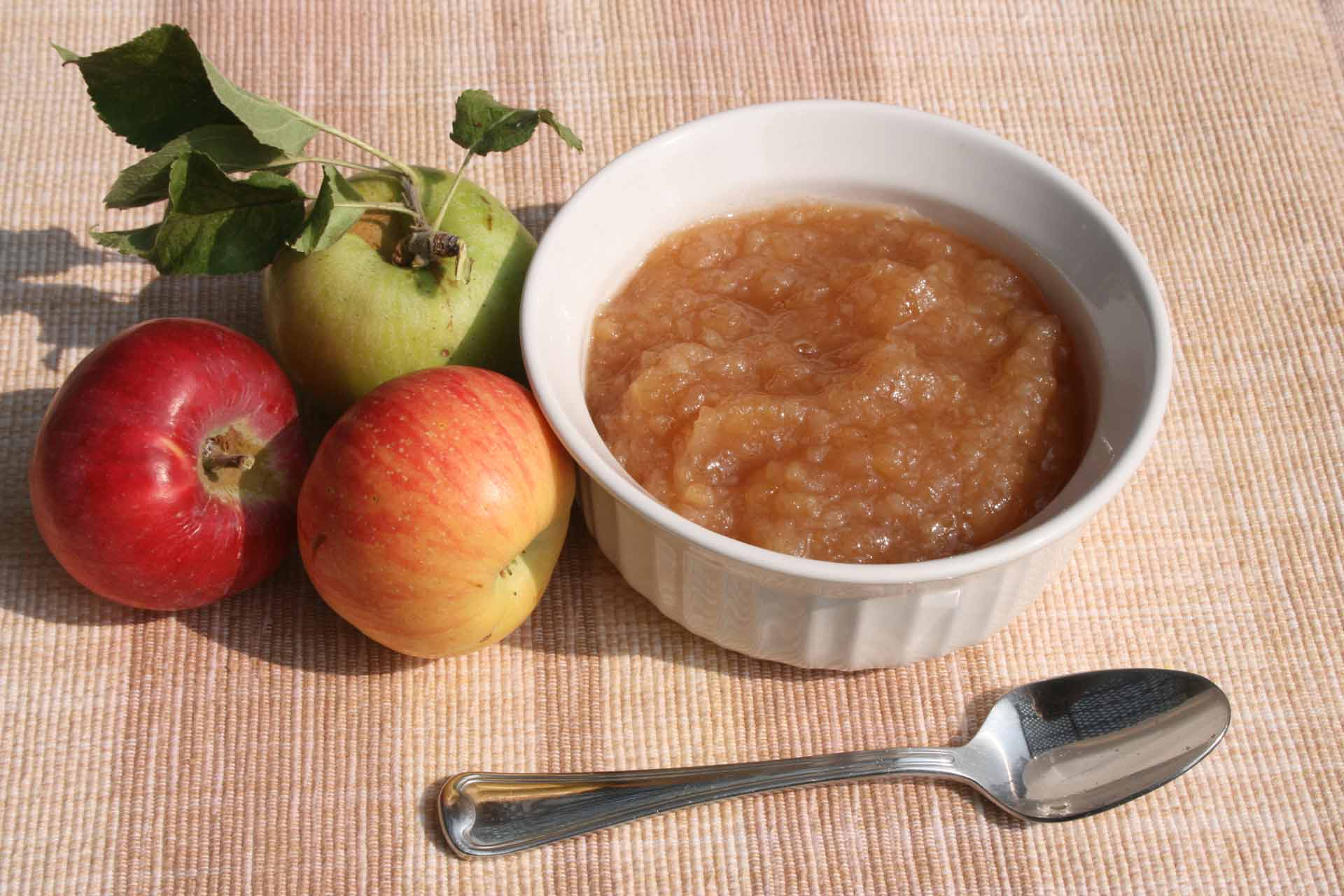 For each quart of peeled, cored, and sliced apples add the following:

Cook all ingredients until tender. Mash apples with a potato masher, electric mixer, or immersion blender until desired consistency is achieved. Serve warm or cold.

End Note: I highly recommend doing this with a special child in your life, even if you don’t have an apple tree. Apples are plentiful at farmers’ markets right now. To include an apple-picking experience, a trip just down the road to Apple Hill, CA, will only increase the fun and adventure.